Innovation is the name of the game when talking about financial technology, also known as fintech. Here, improved methods and services are applied to an emerging industry of technological upheaval, where risk management, trading, and banking transactions are being transformed forever. Across the globe, more and more small companies have been striving to bring their own fintech innovations to the market. As of November 2021, there were over 26 thousand fintech startups worldwide, of which over 40 percent were located in the Americas. Specifically, more than 440 of these fintech startups have set up shop in Mexico, where bank account penetration is low, but internet user penetration continues to grow to new heights. This means that the North American nation offers startups a special opportunity to provide fintech services to a big unbanked, yet online, population.

Mexico does not only provide a marketable population, but also one willing and ready to benefit more from fintech. Each consecutive year, the number of fintech users in the country rises, and by 2023, nearly 97 thousand people in Mexico are anticipated to utilize such services. By that point in time, practically all of those users are expected to take advantage of specifically the digital payment segment of fintech, rather than alternative lending or personal finance. As of 2020, online banking, or sending transfers via the websites of banks instead of through bank apps and terminals, was the most common form of digital banking among the Mexican population.

Out of the leading Mexican fintech startups, Konfio, an online banking and software tool provider, raised the most funds as of February 2021, with a value of approximately 461 million U.S. dollars. In comparison Kueski, a platform focused on instant loans, raised only about 38.8 million dollars. Nonetheless, Kueski has been more than busy, as the amount of loans granted through the fintech startup has skyrocketed from around 200 in February of 2017 to 3.5 thousand in the final month of 2020. The interest in this Mexican online instant loan service is only further apparent considering the 1.3 million website visits Kueski received in January 2021 – an amount nearly four times larger than Konfio’s site views.
This text provides general information. Statista assumes no liability for the information given being complete or correct. Due to varying update cycles, statistics can display more up-to-date data than referenced in the text.
Published by Statista Research Department, Nov 24, 2022

Number of fintechs in the Americas
10,755

Mexico: number of fintechs 2020, by segment 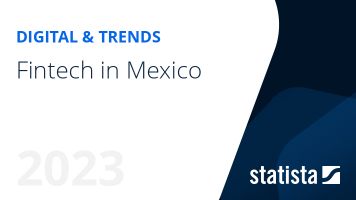 The most important key figures provide you with a compact summary of the topic of "Fintech in Mexico" and take you straight to the corresponding statistics.