Published by Sandhya Keelery, Jul 15, 2020
The twentieth century has brought to reality the idea of a global village, where digital technology has interconnected and enmeshed the world economies, cultures and populations. India is no exception, with over 400 million internet users as of 2018, making it the second-largest internet population in the world. While greater connectivity via the world wide web promises large-scale progress, it also leaves our digital societies open to new vulnerabilities. Cyber crimes know no borders and evolve at a pace at par with emerging technologies.
In fact, according to a 2017 report, Indian consumers had lost over 18 billion U.S. dollars due to cyber crimes. In 2018, there were over 27 thousand cases of cyber crimes recorded in the country, marking an increase of over 121 percent compared to the number of cases just two years back. While the nature of crimes ranges from petty online frauds to lottery scams and sexual harassment, the most targeted crimes seem to be in the banking and finance sector.

Even then, it is important to remember that cyber vulnerabilities aren’t just limited to private sectors. Some of the most dangerous data breaches have been with respect to government data. One such security breach was that involving India’s unique citizen identification system- the Aadhaar, which got hacked in early 2018, compromising extensive personal information including bank details, address and biometrics of over a billion Indians.

Along with economic losses, cyber crimes also impact public safety- especially for minors and vulnerable sections of the society through incidents of cyber bullying and exploitation. In 2018 alone, India recorded over two thousand cases of cyber crimes related to sexual harassment and over 700 cases of cyber bullying against women and minors. Perhaps these high number of cases had led to an increased awareness about the issue of cyberbullying , and a large share of Indians felt that the responsibility for abusive behavior on social media lay with both the users as well as social media platforms.

However, one of the biggest impediments in curbing cyber crimes has been the lack of awareness on cyber hygiene leading to critical digital vulnerabilities. Most cyber crime incidents in India went unreported. And even when crimes were reported to authorities, the infrastructure and process to tackle such cases were largely inefficient. On the bright side, in 2018 the Indian government launched its National Cyber Crime Reporting Portal for citizens to register their complaints online. Under this initiative, cyber cells in various cities across the country have also been training police and government employees how to handle digital security incidents and increase public awareness at the same time.

In the following 5 chapters, you will quickly find the 22 most important statistics relating to "Cyber crime in India ".

The most important key figures provide you with a compact summary of the topic of "Cyber crime in India " and take you straight to the corresponding statistics. 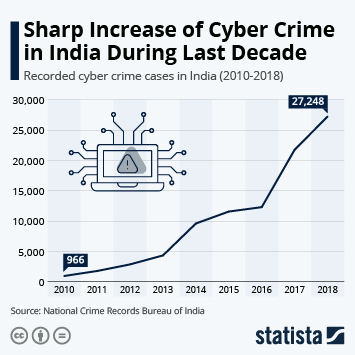