India embraced the internet with open arms, and its digital population has been growing rapidly in the past decade with crossing 900 million active internet users . What started with simple email correspondences, has expanded to a digital universe with social networking giants like Google, Facebook and Twitter becoming a part everyday life for millions of Indians.

Orkut was one of the first, big social networking websites in the country, owned by Google and named after the employee who created it. In 2008, it was one of the most visited websites in the country until its closing was announced in 2014. Not that this stopped Indians from keeping socializing virtually – the country simply transitioned to Facebook. As of 2022, India had the highest number of Facebook users across the globe. Furthermore, Indians adopted Meta’s other platforms as well.
As data packs got cheaper and internet became more accessible, more Indians adopted the digital lifestyle. At the same time, smartphones became the primary screen for Indian customers. As a gregarious country, Indians love their social networking apps. The average Indian spent nearly two and half hours a day on social media.

Apart from social networking apps, video sharing platforms, specifically YouTube was widely popular in India. YouTube consumption sky-rocketed with the Indian Premier League streaming matches in 2010 with over two billion views per day. It comes as no surprise that this doubled with each season of the IPL thereafter. Around the same time, Indian music record label, T-Series, was slowly but steadfastly making its way on YouTube by sharing old Bollywood and indi-pop music. The content took off and T-Series was the most viewed and subscribed YouTube channel in the world.

The evolution of short-form video apps increased the already large base of Indian social media consumption. This grew even more during the COVID-19 lockdown period in the country. The average user for this category spent about 45 minutes a day on these platforms. With the banning of TikTok along with other Chinese apps in 2020 however, this niche market was occupied by a fragmented mix of domestic and global players.

The rapid growth in internet users across the country, along with uptake of marketplaces among social platforms boosted advertising and marketing. The digital market was the fastest growing sector within India’s advertising industry, making space for a promising influencer market.
This text provides general information. Statista assumes no liability for the information given being complete or correct. Due to varying update cycles, statistics can display more up-to-date data than referenced in the text.
Tanushree Basuroy
Research expert covering India
Get in touch with us now
Published by Tanushree Basuroy, Sep 22, 2022

Number of social media users in India 2021, by platform 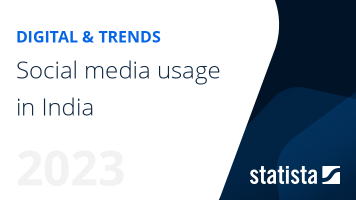 The most important key figures provide you with a compact summary of the topic of "Social media usage in India" and take you straight to the corresponding statistics.