Published by
José Gabriel Navarro,
May 17, 2022
The healing process seems to be complete. According to forecasts, entertainment and media in Mexico will achieve an annual value of nearly 22.5 billion U.S. dollars by the end of 2022, finally surpassing pre-pandemic numbers. The figure was projected to grow by over 10 percent in the following three years, consolidating Mexico as a key market in the Americas. The sector relies heavily on cinema, TV, and newspapers, which altogether accounted for three-fourths of the Mexican media industry revenue in 2020. Their major turnovers also put them among the top employers within Mexico's mediascape. The three segments collectively employed more than 40 thousand people in 2020, almost two-thirds of the Mexican media's workforce.

The hottest spot south of Hollywood

The most emblematic facet of this media market is Mexican cinema. According to the latest available data, the exhibition and distribution of films generated revenues of around 37.5 billion and 1.7 billion Mexican pesos in 2020, respectively. The two segments combined accounted for approximately 46 percent of the revenue of media companies headquartered in Mexico. As a result, the North American country is the leading movie market in Latin America, despite having a population 40 percent smaller than Brazil’s, the largest economy in that region. Like in many other markets worldwide, however, local titles struggled to attract the post-pandemic audience. In 2021, the share of domestic productions in Mexico's box office revenue stood below four percent – the lowest figure in over a decade.

A survey conducted at the end of 2020 put Mexico among the Latin American countries with the lowest levels of trust in the media, as only 35 percent of Mexican respondents expressed some confidence in the industry. Still, news consumers in the North American country turn to traditional names to obtain information, even in the age of the internet. The newspaper El Universal, founded over a century ago in Mexico City, was the most popular online news brand in Mexico in 2021. Meanwhile, several native digital media outlets flourished in Mexico. Uno TV – an online division of América Móvil created in 2008 – had more than 16 million unique visitors in June 2021. This is almost as many visitors as the second, third, and fourth-placed groups drew collectively, suggesting that there is still room for competition in the Mexican digital media market.

In the following 5 chapters, you will quickly find the 44 most important statistics relating to "Media industry in Mexico".

The most important key figures provide you with a compact summary of the topic of "Media industry in Mexico" and take you straight to the corresponding statistics. 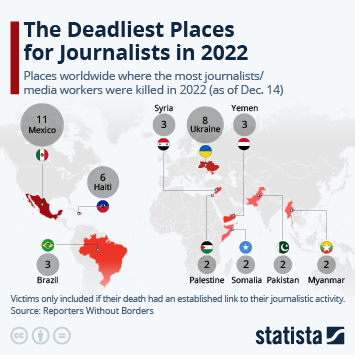