Published by Statista Research Department, Apr 6, 2022
Although vegetarianism is the commonly accepted typecast for India due to its majority Hindu population, only about 400 million Indians were estimated to be vegetarians. A large portion of the population across all religious groups, including Hindus consumed meat in one form or another. Despite the country having one of the lowest per capita meat consumptions in the world, its southern state of Telangana recorded 98.8 percent of its people as meat-eaters, higher than in countries like the United States or Australia. On the other hand, the volume of meat consumed in the state was far lower than industrial countries. Asia ranked the highest in meat production. However, in India poultry contributed to nearly half of the country's meat production. As an emerging market and estimated from the livestock census, the gross value added from livestock was about seven percent.
With its plentiful water bodies and a coastline spanning over approximately eight thousand kilometers, it came as no surprise that India was a leading aquaculture producer in the world. Incidentally, it ensured a steadily increasing export market growth, as marine products as the leading export commodity. Andhra Pradesh was the largest fish producing state in the country with a 20 percent market share, while marine fish production was dominated by the southern-most state of Kerala. Like most other goods markets within the country, the meat and seafood industries were dominated by the unorganized sector. With about eight thousand registered and over 20 thousand unregistered slaughterhouses, there was concern over safety measures because these often go uninspected. Retail was largely via traditional meat shops selling fresh, raw meat. The seafood market witnessed a similar trend.

A point often overlooked, despite there being abundance of meat and seafood, was the way in which they are packaged, stored and marketed. The large export markets and increasing domestic demands for processed food products, specifically with the shift to modern retail outlets in urban areas had led to the slow and steady the growth of the organized market, using better techniques and technologies for preservation. This, in combination with a growing young population, exposed to globalized cultures and food trends would probably ensure a positive aspect in the growth of both industries.

In the following 5 chapters, you will quickly find the 27 most important statistics relating to "Meat and seafood in India". 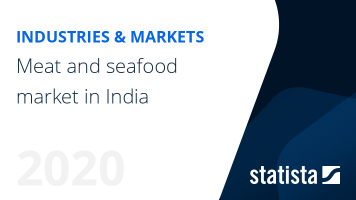 Go to report Meat and seafood in India
Top Seller

The most important key figures provide you with a compact summary of the topic of "Meat and seafood in India" and take you straight to the corresponding statistics.