The agriculture industry in New Zealand has cemented itself as a key economic powerhouse. With a gross domestic product contribution in the billions of New Zealand dollars, it contributes significantly to the country’s tradeable economy. The farming sector produces a vast number horticultural, dairy, and meat products which are consumed locally as well as overseas. New Zealand is one of the world’s largest exporters of dairy products and sheep meat. The agriculture industry also provides job opportunities for thousands of New Zealanders.

New Zealand’s diverse landscape allows for various forms of pastoral farming to dominate in different regions. Sheep farming, beef cattle farming, and dairying are all activities that contribute to the country’s livestock industry. Sheep farming has historically played a significant role in terms of the development of New Zealand's economy, and was the most important segment of the farming industry from 1856 to 1987. A source of the valuable export commodity wool, as well as meat for local trade, job opportunities for sheep farmers were abundant during this period. As the economic value added by this industry has declined over the years, so has the number of sheep livestock in the country.

Horticulture production provides food for New Zealanders, with major crops including wine grapes, kiwi, potatoes, and apples to name a few. New Zealand’s horticulture production also contributes to the needs of the growing global population. Australia is one of the leading export destinations for fresh New Zealand grown fruit and vegetables, as well as for processed goods such as wine. New Zealand wine has developed a reputation for itself over the past few years, and the export value of wine was valued at close to two billion New Zealand dollars.

The dairying industry has taken over in terms of providing the most value to New Zealand’s export economy. The country is the world’s eighth largest dairy producer and exports the vast majority of milk produced in the country. Over time, the dairy industry has grown due to product diversification and innovation. However, there are still challenges facing this segment. Contamination scares and legal issues led to Fonterra, New Zealand’s largest dairy co-operative, recording a significant loss in fiscal year 2019. The company seemed to recover and recorded a net profit in fiscal year 2020.

The future of the agriculture industry in New Zealand will be driven by rapid population growth and consumer demand. As with global trends, organic farming in New Zealand has also seen an increasing share of the market in both horticulture and livestock sectors. Innovative farming methods will be required in order to simultaneously maintain integrity in production processes as well as to ensure sustainable approaches are taken. The agricultural technology sector has the potential to grow substantially. Global AgriTech investment is high and combined with the country’s roots in agriculture and growing tech industry, this provides an opportunity for New Zealand to establish itself as an AgriTech nation.
This text provides general information. Statista assumes no liability for the information given being complete or correct. Due to varying update cycles, statistics can display more up-to-date data than referenced in the text.
Published by L. Granwal, Jan 5, 2022 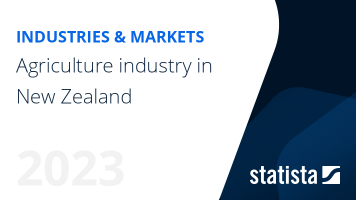 The most important key figures provide you with a compact summary of the topic of "Agriculture industry in New Zealand" and take you straight to the corresponding statistics.