The 2020 Presidential Elections will take place on November 3, 2020, as voters determine whether to elect a new president and vice president or re-elect the incumbents, Donald Trump and Mike Pence. On the other side of the aisle, the Democratic Party will select a candidate from the 28 hopefuls who launched campaigns for this election cycle. As of the start of the Iowa Caucus in February 2020, seventeen candidates already withdrew their bid for the nomination; the candidates still within the race for the Democratic Party nomination include Bernie Sanders, Elizabeth Warren, Pete Buttigieg, Joe Biden, and Amy Klobuchar. Among the qualifying candidates, twelve debates are held where candidates discuss policy positions and debate topics. Just over half of American adults surveyed planned on watching the debates. In the first debate held in 2020, Elizabeth Warren spoke more than any other candidate in attendance. This election cycle, social media's influence has already become a topic of discussion, with many viewers of the Democratic Party presidential debates taking to social network sites such as Twitter to continue the discussion.
To amplify their messages and influence voters, many candidates put out political ads. Candidates spend the most on political ads run on broadcast television. However, in line with a worldwide increase in internet usage, online & digital advertising is also a major expenditure. The Trump Make America Great Again Committee spent the most money of all online ad spenders through 2018-2019, and Donald Trump holds a sizeable lead among the 2020 presidential candidates' political advertising on Google and Facebook.

A social media giant, Facebook is the biggest social network worldwide and a medium where candidates hope to spread their message to a broad audience. Elizabeth Warren, for example, was the candidate who spent the most on the subjects of college education affordability as well as the opioid crisis in 2019, while Bernie Sanders held the lead for Facebook advertising on healthcare. Trump appears to make immigration a focus of his campaign once more and spent 852 thousand U.S. dollars on Facebook advertisements on the topic in the first quarter of 2019 alone, which was an amount more substantial than any other candidate's spending.

In recent years, social media presence has become a substantial part of a candidate's campaign strategy. Bernie Sanders is the Democratic candidate with the most Twitter followers, with over ten million followers. In contrast, Joe Biden, the next most-followed candidate, has just over four million followers. Perhaps most famously, Donald Trump's use of Twitter has been quite controversial, including personal and political admonishments to individuals, as well as using the channel for official announcements. By the midpoint of his term as President, over 60 percent of surveyed adults in the United States thought the way President Trump uses Twitter was inappropriate.

In 2016, the influence of social media on the political process was unexpected by many. The Mueller Investigation concluded that Russian interference in the 2016 presidential election was "sweeping and systematic" and "violated U.S. criminal law." The largest portion of U.S. adults thought that it would be a good thing for social media companies to introduce stricter rules for displaying political ads. Some social media platforms including TikTok and Twitter banned political ads, while Facebook continues to allow political ads.
This text provides general information. Statista assumes no liability for the information given being complete or correct. Due to varying update cycles, statistics can display more up-to-date data than referenced in the text.
Published by S. Dixon, Jun 21, 2022

Global influence of social media on polarization in politics 2019, by country

Global influence of social media on foreign meddling in politics 2019, by country

Global influence of social media on polarization in politics 2019, by country 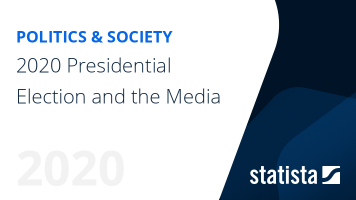 Go to report 2020 Presidential Election and the Media
Top Seller

The most important key figures provide you with a compact summary of the topic of "2020 Presidential Election and the Media" and take you straight to the corresponding statistics.