Pulses in India - statistics and facts

Pulses are one of the most popular food products produced in India. For a country with a well-known population of vegetarians, pulses are an essential source of high-quality protein and dietary fiber. As a part of the legume family, pulses are dried seeds that grow inside the pod.
India is one of the largest producers of protein-rich food grains. In the financial year 2020, India produced more than 23 million metric tons of pulses. The most popular types of pulses grown in India are gram, tur, urad, moong – primarily lentils to make different varieties of Daal, or lentil curry. In the fiscal year 2018, Madhya Pradesh, Rajasthan, and Maharashtra accounted for more than half of the production share of the entire nation. Despite an increase in production, this staple food crop failed to keep up with the consumption rate and population growth of the country. Consequently, India, despite being a primary producer, still imports large volumes. In 2018, Myanmar supplied more than 500 million kilograms of pulses, making it the largest source of the crop for India that year.

Pulses are an essential part of the dry food market across the country. Except for the north-eastern region, pulses formed a considerable share of the dry grocery market in all the remaining parts of the country. In 2020, the value of pulses in the retail market of India towered at 980 billion Indian rupees, a rapid increase compared to five years ago.

The cultivation of this nutrient-rich crop yields several benefits. It grows fast, requires minimum resources for growth and development, and offers flexibility in terms of growing techniques. Pulses improve soil fertility and are a great source of nutritional fodder for the cattle, making them an all-round performer of the agricultural world.
This text provides general information. Statista assumes no liability for the information given being complete or correct. Due to varying update cycles, statistics can display more up-to-date data than referenced in the text.
Published by Statista Research Department, Apr 6, 2022

Estimated production volume of pulses in India FY 2022, by type 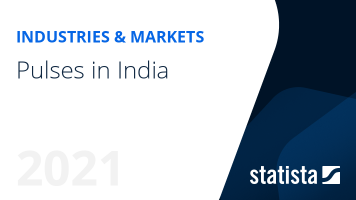 The most important key figures provide you with a compact summary of the topic of "Pulses in India" and take you straight to the corresponding statistics.