Published by Statista Research Department, Apr 6, 2022
India’s large and dynamic geographical area makes its agricultural sector vastly diverse. From cereals and pulses, to spices, fruits and vegetables, the country is, on average, one of the most productive farms in the world. Add dairy and meat from livestock to this mix, and it makes up about 14 percent of the GDP and ten percent of Indian export earnings.
Cereals are staples for Indian meals – primarily rice and wheat. Both grains are used to make meal bases to accompany what is usually a lentil curry with a side of vegetables and/or meat. All of this is cooked in different kinds of oil, depending on the geography and culture in addition to other reasons.

In many households, ghee (clarified butter) is often used for tempering all varieties of dishes. Ghee is generally considered a sacred ingredient among Hindus. It is essential in Vedic offerings through the medium of Agni (fire), like bread and wine in Christianity, or used to make lamp offerings.

Spices are used extensively in daily cooking, varying from freshly available ginger, garlic and curry leaves to dried and powdered chilies, turmeric and coriander; all adding flavors to give Indian cuisine its unique identity. Spices are also used in desserts, from the humble cardamom and cinnamon, to the luxurious saffron. India was where sugarcane and sugar spread from, and where the process of producing sugar crystals was developed. Therefore, it comes as no surprise that the word ‘candy’ originates from the Sanskrit ‘Khanda’. With European explorers travelling to the East, sugar became widely popular for trade.

Farming is an essential part of Indian livelihood, with these crops cultivated in varying degrees and with different methods across the country. The journey of produce from farm to plate, and all the microcosms in between, point to the economics and therefore the laws that constitutionally govern that process. Limitations in public policies and initiatives over the years have resulted in a lack of improvement in irrigation systems, roads to increase time-supply productivity and efficient farming practices despite increased revenues by the goverment. The Green Revolution of the 1960s converted traditional practices into an industrial system, adopting modern methods and technology. Although it led to increased production, it was critiqued for uneven implementation that increased regional disparities, environmental damage by using polluting fertilizers and pesticides, and for its cost to the farmers who ended up borrowing money they could not repay.

Harvest spoilage and un-organized retail along with the latter’s own shortcomings limit the Indian farmers’ ability to sell surplus. On average, a farmer in India receives between 10 and 23 percent of the price the consumer pays for the same produce, regardless of losses and middlemen. This value is between 64 and 81 percent in Europe.

In September 2020, the parliament of India passed three farm bills which stirred angst amongst the farmers leading to vehement protests. The farm bills claim to be “anti-farmer laws” by the farmer unions while politicians from the opposition postulate that it would leave the farmers at the mercy of the corporates. The bill of most concern was that related to the Minimum Support Price (MSP). The MSP set by the government of India before the current regime, protects the farmer by ensuring him a minimum profit for the harvest despite lower market prices than the cost incurred. However, with no MSPs and the farmers having access to a free and open market, the government can no longer guarantee tumbling of prices and the corporates and traders forming cartels while leaving the farmer even more vulnerable than ever before.

On the 19th of November 2021, the prime minister agreed to repeal the three laws after massive year long protests by the farmers that caused nearly 700 dreaths.

In the following 4 chapters, you will quickly find the 26 most important statistics relating to "Farming in India". 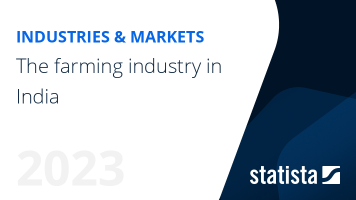 The most important key figures provide you with a compact summary of the topic of "Farming in India" and take you straight to the corresponding statistics. 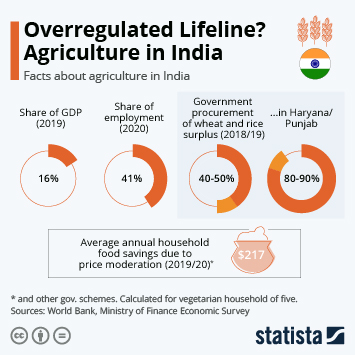