Historically, South Korea has suffered from decades of media censorship. Therefore, it is not surprising that South Koreans are still rather suspicious despite the country’s democratization. In a 2022 study conducted across 40 countries, South Korea ranked low when it came to trust in news, with only around 30 percent of respondents stating they trusted the news.

When asked about the perceived prevalence of so-called “fake news” in news and information provided by newspapers and magazines in South Korea as of February 2019, the majority chose the option “a fair to great extent.” The level of trust in news on social media was lower, with only around 21 percent of respondents trusting news on social media.

Despite the low level of trust of news on social media, around 44 percent of respondents used YouTube as a news source. Consuming news online has become common among news readers. According to a governmental survey, around 93 percent of news readers read online newspapers. Meanwhile, only around 13 percent of South Koreans are paying for their digital news.
This text provides general information. Statista assumes no liability for the information given being complete or correct. Due to varying update cycles, statistics can display more up-to-date data than referenced in the text.
Published by Statista Research Department, Sep 6, 2022 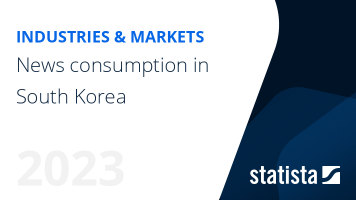 The most important key figures provide you with a compact summary of the topic of "News consumption in South Korea" and take you straight to the corresponding statistics.