Published by Joseph Johnson, Jan 23, 2020
Television industry revenues in the United Kingdom amounted to roughly 16.18 billion British pounds in 2018. Subscription revenues and income from advertising were the two main sources, coming in at 6.4 and 3.8 billion British pounds respectively. Compared to other national markets that same year, the United Kingdom was the leading European country in terms of both pay TV revenues and TV advertising expenditure, followed by Germany, Italy and France. On the consumer side, the average UK household spent a little over 37 British pounds on television services every month in 2018. This was higher than eight years earlier in 2010, when monthly spending per household came to roughly 30 British pounds.
For many years, television was the unchallenged champion when it came to daily time spent with media by consumers. In 2007, the average UK consumer spent 4.1 hours watching television, whereas a mere 42 minutes were set aside for the internet. However, digital media usage time increased significantly over the next few years, whereas TV viewing time steadily fell and was eventually surpassed by digital in 2013. In 2017, the average daily television viewing time came to 3.38 hours per individual, with consumers aged 65 years and older spending the most time in front of the TV at 5.7 hours per day and women out-watching men by a little over half an hour.

In terms of content, viewers favored entertainment shows, with 18.47 percent of the monthly audience share going to programs of this genre. Documentaries and dramas; including series, soaps and single plays, ranked next highest. The most popular TV channel was BBC 1, with a quarterly reach of around 55 million viewers from July to September 2019. Channel 4 and BBC2 came in second and third.

The rise of video-on-demand (VOD) cannot be ignored. The number of households with subscription video-on-demand (SVOD) services has been rapidly increasing year after year. With this, online TV revenues have also grown to over 2.6 billion GBP.

In the following 7 chapters, you will quickly find the 42 most important statistics relating to "Television industry in the United Kingdom (UK)".

The most important key figures provide you with a compact summary of the topic of "Television industry in the United Kingdom (UK)" and take you straight to the corresponding statistics.

Television in the U.S.

Online TV in the U.S.

Subscription Video On Demand in the U.S. 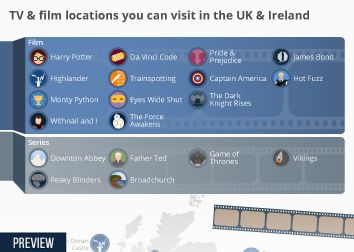 TV & film locations you can visit in the UK & Ireland

Joseph Johnson
Research expert covering media, advertising & the internet in the UK & Europe
Get in touch with us now