Advertising and market research companies in Italy - Statistics and Facts

Published by Statista Research Department, Nov 28, 2022
Since 2013, the sector of advertising and market research has experienced a steady growth in Italy, as the increasing turnover value and other indicators showed. In Italy, the annual internal demand of advertising and market research rose by two percent in 2019 and is expected to increase further by 2.3 percent by 2021. The profitability of financial investments in the industry was quite positive, too. Since 2018, the return-on-investment rate performed by companies has increased and is expected to reach 8.4 percent by 2021.
This might lead to higher employment rates. In fact, the number of employees working for advertising and market research companies is expected to grow to 39.9 million by 2021. The projection partially reflects in the staff expanding already reported by the largest groups as of 2018.

With 96.5 percent, the ranking of the financially best-performing agencies saw Amnet Italia S.r.l reporting the highest return-on-equity (ROE) rate between 2015 and 2017. GroupM and PHD followed in the ranking, together with other Italian branches of international companies. The big groups now operate across different segments of the media industry, including media services. The service of media agencies consists of managing the exposure of companies and individuals in the media. In this field, in 2018, GroupM made up 36.8 percent of the market value thanks to its main agencies Wavemaker, Mindshare, and MediaCom. Dentsu was the second-biggest player with a market share of 19 percent and a total estimated billing value of 1.7 billion euros in the same year.

In the following 3 chapters, you will quickly find the 20 most important statistics relating to "Advertising and market research companies in Italy". 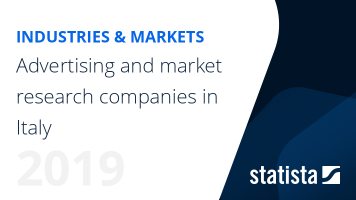 The most important key figures provide you with a compact summary of the topic of "Advertising and market research companies in Italy" and take you straight to the corresponding statistics.

Advertising in the UK