Published by
M. Shahbandeh,
May 18, 2022
With the United Kingdom’s exit from the European Union, concerns have arisen over chlorinated chicken imports from the United States. Questions are being raised about what the future standards will be for the poultry industry in the UK. All these questions are of major relevance to the more than 2,600 companies working on raising poultry in the UK. In 2021, 1.12 billion broilers, almost 43 million boiling fowl, and about 11 million turkeys were slaughtered in the UK.

In 2020, the UK production value of poultry and poultry meat was over 2.8 billion British pounds. This translated to an output of 1.97 million metric tons that year. The overwhelming majority of slaughtered animals were broiler chickens, followed by turkeys. Only a comparatively small number of boiling fowls and ducks are slaughtered every year. The volume of meat from broiler chickens was more than ten times larger than the amount of turkey meat produced.

Over 500 companies in the UK produced poultry meat. In 2020, UK meat and poultry meat product manufacturing had a sales value of approximately 5.9 billion British pounds. Producer prices have gone up for poultry and specifically chicken between 2015 and 2021. Consequently, consumer expenditure for cooked poultry has risen as well.

In the following 6 chapters, you will quickly find the 33 most important statistics relating to "Poultry in the United Kingdom ". 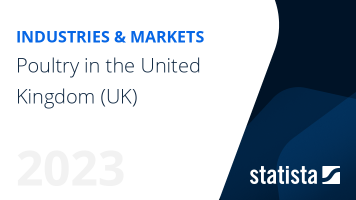 The most important key figures provide you with a compact summary of the topic of "Poultry in the United Kingdom " and take you straight to the corresponding statistics.

Poultry industry in the United States