Published by
M. Shahbandeh,
Apr 26, 2022
The United States has a robust poultry industry, with an inventory of over 518 million chickens and over 224 million turkeys. In 2019, chicken production rose to around 44 billion pounds. The market leader for poultry products in the U.S. is Tyson with over 42 billion U.S. dollars in sales . One of the biggest product segments of Tyson Foods is fresh and processed chicken meat.

Within the United States, consumers purchase a large amount of meat products. The chicken was the second most frequently bought fresh meat category, with sales of 13.4 billion U.S. dollars. Chicken breasts were the most popular cut, comprising over 60 percent of product sales. Chicken sales growth in the U.S. were positive by 4.7 percent for 2021. Both chicken and turkey sausages are expected to increase in dollar sales and sales volume by 2023, perhaps as many people find chicken and turkey sausages to be the healthiest type of encased meat products.

In the following 5 chapters, you will quickly find the 31 most important statistics relating to "Poultry industry in the United States". 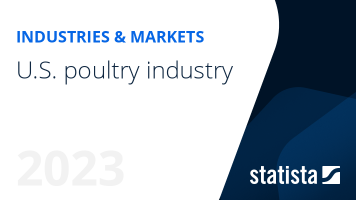 Go to report Poultry industry in the U.S.
Top Seller

The most important key figures provide you with a compact summary of the topic of "Poultry industry in the United States" and take you straight to the corresponding statistics.

Egg industry in the U.S.