Published by
Dominique Petruzzi,
Nov 11, 2022
The Danish cosmetics and personal care market generated increasing revenue  in recent years, reaching 1.4 billion euros in 2021, and it is expected to continue growing in the future. Its personal care segment has proven to be one of the most lucrative, followed by skincare, which constantly generated more revenue in the past. A positive trend is expected also for the fragrance and cosmetics categories.
As a matter of fact, the retail sales revenue of cosmetics and toilet articles reached approximately 2.9 billion Danish kroner in the fourth quarter of 2021. That same quarter, sales revenue from the manufacture of soap and detergents, cleaning and polishing preparations amounted to 603 million Danish kroner, while perfumes generated 405 million Danish kroner in sales.

As of May 2022, the Danish health and beauty retailers Matas Operations A/S and Normal A/S were among the top three companies in the cosmetics, perfume, and hairdressing industry in the country, according to a ranking based on revenues. Matas Operations A/S, the largest Danish health and beauty retailer, reported a revenue of about 3.8 billion Danish kroner in the period. The drug store chain, founded in 1949, also sells personal hygiene products and other home goods, as well as household chemicals. In the financial years from 2012/13 to 2021/22, Matas increased its revenue slightly, but remained stable overall. Compared to the previous fiscal year, its gross profit also increased, reaching almost two billion Danish kroner as of 2021/22.

What beauty brands do Danes buy the most?

When we look at the popular beauty brands, Danish consumers bought mainly international brands instead of domestic ones. In the fist half of 2022, the American manufacturer Clinique was the most popular make-up brand in the Scandinavian country, as it generated more than 24 million Danish kroner. The French company Lancôme and the brand Clarins followed in the ranking. That year, Elizabeth Arden was the leading  fragrance brand for women in Denmark, while for men it was Hugo Boss, with a revenue of about 23 million Danish kroner in the country.

In the following 7 chapters, you will quickly find the 46 most important statistics relating to "Cosmetics and body care industry in Denmark". 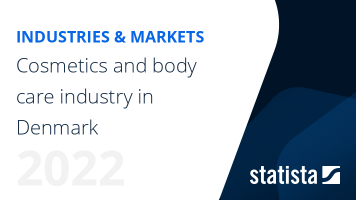 The most important key figures provide you with a compact summary of the topic of "Cosmetics and body care industry in Denmark" and take you straight to the corresponding statistics.