In recent years, the value of the cosmetics market worldwide increased and is expected to continue growing in the future. The market was projected to be worth about 131 billion U.S dollars by 2026. As of 2021, North Asia made up 35 percent of the global cosmetic market, followed by North America with 26 percent. The cosmetics market can generally be broken down into five main categories: skin care, hair care, make-up, perfumes, and hygiene products.

Looking at the European cosmetics market, skin care products and toiletries are the two dominating products. While skin care's market value reached a value of about 21.5 billion euros in 2020, toiletries were close behind. By comparison, decorative cosmetics achieved the lowest result, with only 9.4 billion euros. In 2022, prestige and luxury beauty products generated the highest revenue in Germany and France, with a sales value of about 1.3 billion euros in both countries. Within the European cosmetics market, Germans also consumed the largest amount of cosmetics in the same year; their total cosmetics consumption value amounted to around 13.6 billion euros. In second place came France, followed by Italy, the United Kingdom, and Spain.

Based on its brand value of approximately 9.7 million U.S. euros, the brand L’Oréal Paris was first in the ranking of European cosmetics brands in 2022. The French personal care company was founded in 1909 and has not only become the largest cosmetics and beauty company in Europe, but also in the world. Nivea ranked second, with a brand value of about six billion euros. Nivea is a German personal care brand, owned by the multinational corporation Beiersdorf AG, which was founded in 1882. In the past years, both companies showed increasing revenues – according to the latest available financial figures, L’Oréal reached its peak at approximately 32 billion U.S. dollars in 2021, while Beiersdorf peaked at nearly eight billion euros in 2019.
This text provides general information. Statista assumes no liability for the information given being complete or correct. Due to varying update cycles, statistics can display more up-to-date data than referenced in the text.
P. Smith
Research expert covering apparel industry and general merchandise
Get in touch with us now
Published by P. Smith, Nov 17, 2022

Share of skin care products in the global cosmetics market
41%

Breakdown of the cosmetic market worldwide 2011-2021, by product category

Market value of cosmetics industry in Europe 2021, by branch 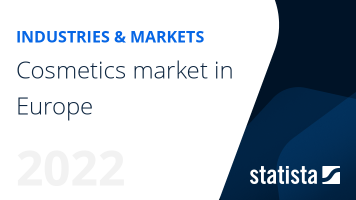 The most important key figures provide you with a compact summary of the topic of "Cosmetics market in Europe" and take you straight to the corresponding statistics.