Published by
Dominique Petruzzi,
Feb 16, 2022
The United Kingdom is among the leading three cosmetic consumers in Western Europe. The cosmetics boom in the UK happened in 2017, when the sector’s market value reached a staggering 9.8 billion British pounds. By 2019, the market value regressed slightly compared to the previous two years. Among the many sub-sectors within this industry, colour cosmetics took a hit in 2019, dropping by 17 percent compared to the previous year.
Despite this stagnating state of affairs in the cosmetics sector in general and colour cosmetics in particular, many other cosmetic product categories continued to flourish in 2019. This was especially valid for skincare, which has attracted more focused attention in recent years thanks to a variety of new trends and product ranges launched on the market. In Great Britain, the market value of skincare products was 2.2 billion British pounds in 2019, marking a return back to more dynamic figures after the previous year's slight decrease. Similarly, fragrances saw increased market value, especially from 2013 onwards. By 2019, this market was worth over 1.74 billion British pounds.

On the retail side of the spectrum, over the past decade, UK retail stores specializing in cosmetics and personal care increased their turnover from selling such products, going from 2.7 billion in 2008 to over 5.3 billion British pounds in 2018. Between 2008 and 2012, although the number of such establishments fluctuated, by 2018 there were an additional 93 stores on the year prior for the retail sales of cosmetic and toiletry articles in the UK, making this the highest number within that period of time.

One booming global trend in the cosmetics sector is the growing demand for and availability of organic and natural cosmetic products. In the UK, the sales value of certified organic health and beauty products currently stands at over 86 million British pounds. Although organic beauty may still be considered niche compared with conventional cosmetics, the growth in the industry has been nothing short of phenomenal, with sales tripling since 2010.

Some of the most popular cosmetics brands for British consumers were homegrown names such as Boots No.7 and Rimmel, for facial cosmetic products and eye make-up ranges alike. Boots’ No.7 skincare and cosmetic line holds an especially iconic place in the UK cosmetics sector. Introduced in 1935, No.7 has since then added commercially successful products to its beauty inventory.

In the following 7 chapters, you will quickly find the 38 most important statistics relating to "Cosmetics market in the United Kingdom (UK)". 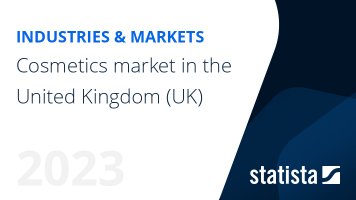 The most important key figures provide you with a compact summary of the topic of "Cosmetics market in the United Kingdom (UK)" and take you straight to the corresponding statistics.

Men's grooming and cosmetics market in the United Kingdom (UK)