Published by Aaron O'Neill, Nov 10, 2020
The United States presidential election is a quadrennial event, used to determine who will become President and Vice President for the following four-year term. In total, 59 elections have been held since 1789, and 40 of the 46 presidents have been elected this way (including President-elect Joe Biden). The U.S. uses an electoral college system, where each state has a specified number of electors (proportional to population) who vote for their preferred candidate. Since 1824, most states have adopted a winner-take-all approach to presidential elections, where electors cast all ballots for the state-wide winner of the popular vote. The total number of electoral votes grew as the U.S expanded over time, and since 1964 there have been a total of 538 electoral votes on offer. Therefore, candidates need a majority of 270 votes to win the election outright. If no candidate secures a majority of electoral votes, the House of Representatives then chooses the winner, however this has only happened twice (1800 and 1824). There were four further occasions where the most popular candidate nationwide did not win the election, due to the nature of the electoral college system (1876, 1888, 2000 and 2016).

The U.S. has used a two-party system throughout most of its history, and the Democratic and Republican Parties dominated U.S. politics since the 1828 and 1860 elections respectively. Following the 2020 election, Republican candidates have won 24 elections, while Democrats have won 23. Until the mid-1900s, the Democratic Party was generally more conservative, with the strongest following among southern and rural voters, while the Republican Party tended to be more liberal, popular in the northeast and in urban centers. These roles have been reversed in modern elections, with the Democratic economic shift becoming most evident in the Franklin D. Roosevelt administration during the Great Depression (1930s), while the ideological realignment became apparent during the civil rights era (1950s-1960s). Despite these changes, it took years for many voters to support the party whom they had opposed for so long. It was not until the Republican’s “Southern strategy” (1960s-1970s), which capitalized on residual racial tensions in the south and pushed the party further to the right, where voting trends and party policies became more closely aligned.

At first only property-holding, white males could vote, but suffrage was extended to almost all white men by 1856. Slaves were never allowed to vote, and despite universal suffrage for all black men following the Civil War, oppressive Jim Crow laws effectively disenfranchised the black vote in the south until the 1960s. As black populations were included when calculating electoral representation, white southerners therefore had a disproportionate influence on U.S. elections throughout most of its history. After a century-long struggle, women were finally granted nationwide suffrage in 1920, and since the 1980 election, women have consistently had a higher turnout in presidential elections than males. Recent decades have also seen black voter-turnout reach a par with that of white voters. An increasing turnout among the growing Hispanic population, particularly in the southern-border states, is set to cause a major upheaval in future presidential elections.

In the following 4 chapters, you will quickly find the 31 most important statistics relating to "U.S. presidential elections 1789-2020".

The most important key figures provide you with a compact summary of the topic of "U.S. presidential elections 1789-2020" and take you straight to the corresponding statistics. 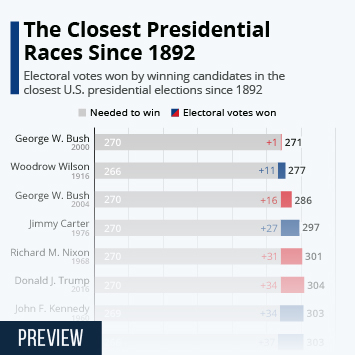 Closest US Presidential Races Since 1892