According to a very popular story, but of doubtful authenticity, rugby was invented in 1823, when a pupil of the Although Rugby School in Warwickshire, England, picked up the ball and started to run in the middle of a football match. Legend or not, this game became common at Rugby School during the 1830s, spreading to the rest of the UK during the following decades. In Italy, rugby found its popularity during the first years of the twentieth century and in 1928 the Italian Rugby Federation (FIR) was formed. Then, according to the latest figures published by the Italian National Olympic Committee, the FIR registered over 82 thousand athlete memberships as of 2017.
Looking at recent financial data compiled by the FIR, revenues of the Italian Rugby Federation increased overall from 2011 to 2018. Furthermore, estimates for 2020 reveal that the federation expected to generate revenues of 43.9 million euros, while its operating costs are estimated to reach 43.8 million euros. In this sense, the Six Nations Championship represented the main source of income, while most costs related to the training of national teams.

Considering national competitions, the most popular is the TOP12 league, which is the highest tier in Italian professional male rugby and was formerly known as Super 10. As of the 2018/2019 season, Amatori Milano was the TOP12 club winning the highest number of championships. Moreover, Rugby Calvisano won the highest number of TOP12 matches between the 2003/2004 and 2019/2020 seasons.
This text provides general information. Statista assumes no liability for the information given being complete or correct. Due to varying update cycles, statistics can display more up-to-date data than referenced in the text.
Published by Statista Research Department, Aug 30, 2021

Revenues of the Italian Rugby Federation 2011-2020

Revenues of the Italian Rugby Federation 2020, by source

Revenues of the Italian Rugby Federation 2011-2020 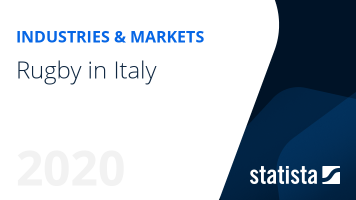 The most important key figures provide you with a compact summary of the topic of "Rugby in Italy" and take you straight to the corresponding statistics.