Volleyball is one of the most popular and practiced sports in Italy. Thus, it comes as no surprise that Italy is one of the most successful nations worldwide in both male and female senior volleyball. According to the World Ranking compiled by the International Federation of Volleyball (FIVB), the national male team recorded a total of 206 points in 2019, ranking fourth behind Brazil, U.S. and Poland. Similarly, the Italian female team was one of the ten most successful female volleyball teams worldwide in 2019.
In 2018, there were over 330 thousand Italian athletes practicing this sport, most of whom were female. In terms of indoor volleyball societies, roughly four thousand organizations were recorded, of which over 800 hundred were located in Lombardy.

The FIPAV and the male and female Lega Pallavolo Serie A - which are consortiums representing Italian volleyball teams playing in the top tiers leagues - organize the two most important championships in the country: the Superlega (male volleyball) and the Serie A1 (female volleyball). Between the 2011/2012 and 2018/2019 seasons, revenues of Superlega volleyball games increased overall, amounting to over 3.7 million euros in the last season considered. As of the first half of the season 2019/2020, Leo Shoes Modena was the team generating the highest revenues from Superlega volleyball games. However, as the 2019/2020 season ended early because of the coronavirus (COVID-19) pandemic, it was estimated that Leo Shoe Modena could be one of the Superlega teams registering the highest revenue loss because of the suspended games.

Overall, Leo Shoes Modena was also the team recording the highest attendance at Superlega volleyball games as of the first half of the 2019/2020 season. As of the same period, the most attended Superlega match recorded almost nine thousand spectators, while the most popular Serie A1 game was attended by over five thousand people.
This text provides general information. Statista assumes no liability for the information given being complete or correct. Due to varying update cycles, statistics can display more up-to-date data than referenced in the text.
Published by Statista Research Department, Dec 3, 2020

Number of members in the Italian Volleyball Federation 2017-2018, by role

Number of female athletes in the Italian Volleyball Federation in 2018
248,557

Number of athletes in the Italian Volleyball Federation 2017-2018, by gender

Number of indoor societies in the Italian Volleyball Federation in 2018
4,414

Number of indoor societies in the Italian Volleyball Federation 2017-2018, by region

Most successful nations in male volleyball in FIVB World Ranking 2022

Women's volleyball clubs winning the Serie A1 in Italy 1945-2020, by victories

Superlega and Serie A1 clubs 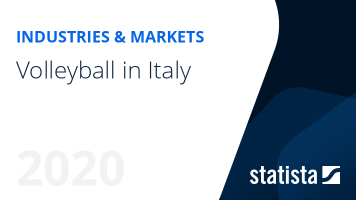 The most important key figures provide you with a compact summary of the topic of "Volleyball in Italy" and take you straight to the corresponding statistics.