Published by Statista Research Department, Dec 3, 2020
The history of cycling as a sport in Italy goes back to the end of the nineteenth century, when the first races were organized. However, it was during the first half of the 1900s that this sport reached its peak of popularity, also thanks to the remarkable achievements of cyclists as Fausto Coppi and Gino Bartali. Nowadays, cycling is still one of the most popular sports in the country. According to figures compiled by the Italian Cycling Federation (FCI), Lombardy, Veneto, and Tuscany were the regions recording the highest number of cycling clubs in 2020. Moreover, data show that most federation memberships related to amateur male cyclists aged between 50 and 54 years, the so-called Master Men 5.
From 2008 to 2018, FCI revenue increased overall, rising from 16 million euros to over 18.7 million euros. Then, estimates for 2019 revealed that this figure could decrease slightly. As calculated by the federation, the grant provided by the Italian Olympic Committee (CONI) is expected to be the main source of funding in 2019. Furthermore, member fees also represented an essential source of income.

The most important cycling race in Italy is without doubt the Giro d’Italia. Started in 1909, the event is part of the Grand Tours, together with the Tour de France and the Vuelta a España. In 2019, the Giro generated a revenue of over 40 million euros, most of which came from sponsorships, and awarded prize money of over 265 thousand euros for the race winner, Richard Carapaz. The team Movistar, for which Carapaz was running, won the highest prize money overall. Occasionally, the route of the Giro d’Italia starts or passes through other countries. The 2020 race, supposed to start in Budapest on May 9, has been postponed to October, due to the impact of the coronavirus (COVID-19) pandemic.

Apart from the prestige and the prize money, winning or performing well at the Giro d’Italia is also useful in terms of the UCI World Ranking, as the International Cycling Union (UCI) compiles its ranking based on the results achieved at international races. As of March 2020, the Italy's male national cycling team was second in the world ranking, and so did the Italian female cycling team.

In the following 7 chapters, you will quickly find the 30 most important statistics relating to "Cycling in Italy". 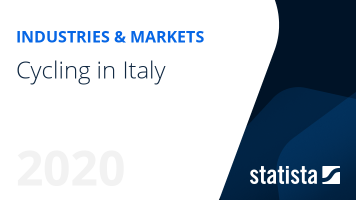 The most important key figures provide you with a compact summary of the topic of "Cycling in Italy" and take you straight to the corresponding statistics.