Published by
M. Shahbandeh,
Sep 1, 2022
Cheese is a widely consumed dairy product. There are copious amounts of cheese varieties, such as cheddar, feta, gouda, parmesan, and camembert, which are produced in different parts of the world. In 2021, the global market value of cheese stood at roughly 77.6 billion U.S. dollars, a number which is projected to exceed the 113 billion U.S. dollar mark by 2027.

Many of the world’s top cheese exporting and importing countries were also European: Germany, the Netherlands, Italy, and France were the leading exporters by a significant margin in 2020. By far the leading importer of processed cheese that year was the United Kingdom, which imported over 280 million U.S. dollars’ worth of the cheese type. France stood in second place that year, importing less than half that amount.

In the following 4 chapters, you will quickly find the 21 most important statistics relating to "Global cheese market". 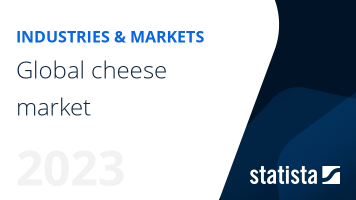 The most important key figures provide you with a compact summary of the topic of "Global cheese market" and take you straight to the corresponding statistics.

Cream cheese market in the U.S.