Europeans love their cheese. Every year, approximately nine million tons of cheese are consumed in the European Union. On average, a resident of the European Union eats around 15 kilos of cheese, and that figure is only expected to increase. According to figures for the cheese consumption per capita in the EU, in 2021 Europeans ate some 20 kilos of cheese. There are marked differences in consumption between countries. In 2019, Swedes and Norwegians each ate nearly 19 kilos of cheese per year, most of it white cheese. Italians ate even more on average, with 24 kilos per capita. The Spanish, on the other hand, only ate some 8,5 kilos per year in 2019, most of it fresh cheese and semi-cured cheese.
Expenditure on cheese in Belgium reached 113 euros per person in 2018, an increase of five euros in comparison to ten years earlier. In Spain consumers spent roughly half of that amount, with an average of 58 euros per capita.

Most of the cheese produced in Europe was exported to other European countries, as well as other continents. Of the Dutch cheese, for example, approximately 33 percent is exported to Germany and 12 percent is exported to Belgium. Only a small percentage of the Dutch cheese is exported outside of Europe. The main export destinations for Swedish cheese were the Scandinavian neighbors Denmark, Finland, and Norway. French exports amounted to more than 650,000 tons in 2020, whereas Italy exported some 164,000 tons of fresh cheese in the same year.
This text provides general information. Statista assumes no liability for the information given being complete or correct. Due to varying update cycles, statistics can display more up-to-date data than referenced in the text.
Published by Statista Research Department, Feb 24, 2022

Annual production volume of cheese in the UK
504k mt

Import volume of cheese to the UK
499k t

Volume of cheddar cheese produced in the UK
360k mt 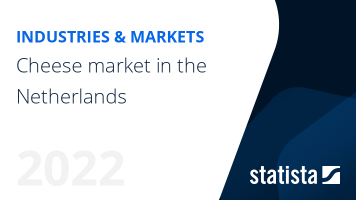 Go to report Cheese market in the Netherlands
Top Seller

The most important key figures provide you with a compact summary of the topic of "Cheese market in Europe" and take you straight to the corresponding statistics.