Over the past ten years, U.S. per capita consumption of cheese has increased by over five pounds. The average consumers in the U.S. ate about 40.2 pounds of cheese in 2020. That year, Americans consumed about 15.6 pounds of American cheese per capita and 15.64 pounds of Italian cheese per capita. According to a 2020 survey, the Kraft Singles were the leading American cheese brand eaten most often in the United States. That year about 203 million Americans consumed regular natural or imported cheese, while 3.7 millions ate the fat free/non-fat cheese type.
This text provides general information. Statista assumes no liability for the information given being complete or correct. Due to varying update cycles, statistics can display more up-to-date data than referenced in the text.

Quantity of cheese produced in the U.S.
6.2m metric tons

Top countries of destination for U.S. cheese and curd exports 2013 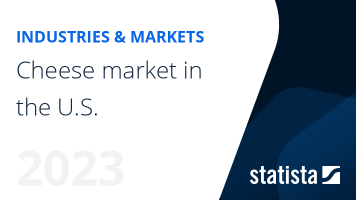 Go to report Cheese market in the U.S.
Top Seller

The most important key figures provide you with a compact summary of the topic of "Cheese market in the U.S. " and take you straight to the corresponding statistics.