Pollution is defined as the introduction of harmful contaminants into the environment that negatively alters our surroundings. The widespread prevalence of environmental pollution began with the birth of the industrial revolution and has not slowed down since. As economies and populations have continued to grow over the years, so too has environmental pollution. This has created a serious global problem that continues to affect biodiversity, ecosystems, and human health worldwide. While pollution can take several forms, such as light and noise, the three major types are air, land, and water pollution. Humans contribute to each of these every day.

Air pollution is one of the most important environmental issues facing the planet today. Air pollution is not only devastating to the environment but also human health. Globally, it is estimated that there are some seven million deaths related to air pollution each year. Some of main sources of air pollutants are transportation, industrial processes, and domestic combustion, which emit large volumes of harmful pollutants such as nitrogen oxides, lead, sulfur oxides, and particulate matter. PM2.5 refers to atmospheric particulate matter that has a diameter of fewer than 2.5 micrometers. The World Health Organization advises that annual mean PM2.5 concentrations should not exceed 10 µg/m3, but PM2.5 concentrations in countries around the world are considerably higher, especially in developing regions.

Land pollution refers to the deterioration of the earth's surfaces through direct or indirect human activities. There are many causes of land pollution, including agricultural fertilizers andpesticides use, mining, and landfill sites. Humans produce huge volumes of solid waste every year, but much of this waste is landfilled or disposed of at open dumps, which inevitably leaks into the environment. Some of the largest landfills in the world stretch hundreds of acres and store waste that can take centuries to fully decompose.

Deforestation is also a form of land pollution. When trees are cut down for developments the land below is no longer protected from the sun. Over time this land becomes barren, resulting in soil erosion and desertification.

Human-activities on land are the most common causes of pollution in oceans, rivers, lakes, and other waterways. For example, agricultural pesticide run-off is the main cause of nitrate contamination in groundwater, while sewage released into waterways exposes millions of people to drinking water contaminated with human excrement and diseases like cholera and dysentery.

It isn't just humans that are negatively impacted by water pollution. Plastic waste has gained negative attention in recent years due to images of marine animals trapped in plastic netting or choking on plastic straws and wrappers. There are now trillions of pieces of plastic in the ocean that, when combined, can be as big as a country.

Fuel spillages are another significant cause of water pollution that have a devastating impact on marine life. One of the largest oil spills in recent history occurred when an explosion at BP's Deepwater Horizon rig caused more than 200 million gallons of oil to spill into the Gulf of Mexico, killing thousands of animals and contaminating their habitats.
This text provides general information. Statista assumes no liability for the information given being complete or correct. Due to varying update cycles, statistics can display more up-to-date data than referenced in the text.
Published by Ian Tiseo, Dec 9, 2022

Estimated global deaths from all sources of air pollution
6.7m

Global deaths due to air pollution 2019, by type

Average PM2.5 levels in the most polluted cities worldwide 2021 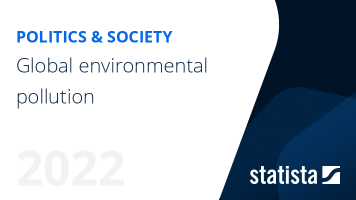 The most important key figures provide you with a compact summary of the topic of "Environmental pollution worldwide" and take you straight to the corresponding statistics.