The steadily growing trend of online retail purchases in Europe calls for more industrial and logistic facility space to store goods for further delivery. The Swedish e-commerce sector is not an exception. The sector turnover increased continuously for over fifteen years and reached almost 130 billion Swedish kroner in 2021. In the first half of 2021, Sweden had the third largest industrial and logistic real estate investment market in Europe - a result of several years of investment growth.

The highest rental costs for leased industrial properties in prime locations in Sweden in 2020 were found in Stockholm, although Stockholm was among the Nordic capitals with the lowest prime rents. The monthly prime rental price for warehouses in Stockholm was around 10.3 euros per square meter as of the first half 2021, and eight euros per square meter for logistic and distribution facilities. For the other large city areas in Sweden, prime rental price for logistic and distribution spaces was higher in the Gothenburg area than around Malmö. Warehouses, on the other hand, had a higher prime rental price in Malmö than in Gothenburg.

Prime yields of large warehouses in the Swedish capital Stockholm in the second quarter of 2021 were relatively low compared to other European cities. Yields are a measure of the property’s return on investment, and factors such as demand, quality, leasing time, and location are just a few among many that may affect yields. Large warehouses in Stockholm, with space of over five thousand square meters, had decreasing prime yields in 2020, ending up at 4.6 percent.
This text provides general information. Statista assumes no liability for the information given being complete or correct. Due to varying update cycles, statistics can display more up-to-date data than referenced in the text.
Published by Statista Research Department, Dec 6, 2021

Industrial and logistics investment on the real estate market in Sweden
5.6bn EUR

Prime rents of large warehouses in Europe Q4 2021, by city 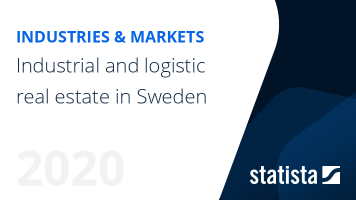 The most important key figures provide you with a compact summary of the topic of "Industrial and logistic real estate in Sweden" and take you straight to the corresponding statistics.