Published by
Christina Gough,
Jul 11, 2021
The Colorado Rockies are a Major League Baseball franchise based in Denver, Colorado, who have competed in the West Division of the National League since 1993. The Rockies won their only National League pennant by defeating Arizona Diamondbacks in 2007. This allowed them to compete in the World Series for the first time in their history, but they were beaten by the Boston Red Sox in four games. The team is owned by the Monfort brothers and managed by Bud Black.
The franchise value of the Colorado Rockies has been on the rise in recent years, reaching 1.3 billion U.S. dollars in 2021. This value is nevertheless still under the average franchise value across the MLB. The team generated about 109 million U.S. dollars in revenue in the 2020 season and the operating income of the Rockies for that season generated a deficit of 65 million U.S. dollars, a harsh decline in that year as will all other professional sports clubs due to the COVD-19 pandemic.

Cumulative home attendance of the Colorado Rockies reaches well into the millions every year, hitting its most recent peak in 2018 with over three million fans. The teams plays its home games at the Coors Field in Denver, Colorado, which has been the Rockies’ home since 1995. The average regular season attendance has been quite stable over the past few years and stood at just under 37 thousand in 2019. The average ticket price for home games of the Rockies has been increasing in recent years and amounted to over 27 U.S. dollars during the 2019 season. The team’s Twitter and Facebook accounts have over one million fans and followers combined.

In the following 4 chapters, you will quickly find the 40 most important statistics relating to "Colorado Rockies ". 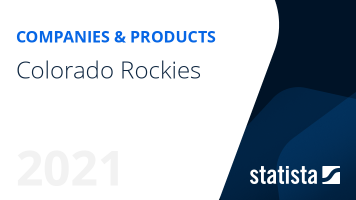 The most important key figures provide you with a compact summary of the topic of "Colorado Rockies " and take you straight to the corresponding statistics.