Start-up investments and unicorn companies, privately owned companies that reached a market value of over one billion U.S. dollars through either private or public investment, are widely seen as an interesting topic for corporate finance in many countries worldwide. For the small countries of Belgium, the Netherlands and Luxembourg, however, this is a topic with varying data quality. Ranking behind seven others in an overview of Europe's biggest startup cities, the number of investments in Amsterdam-based start-ups grew by over 80 percent in 2019, but was behind figures set in the record year 2017. Brussels and Luxembourg City did not feature at all on this list. Indeed, figures in the three countries can vary wildly per year. Total startup rounds in Belgium grew by nearly 40 percent year-on-year in 2018, before decreasing again by 25 percent y-o-y in 2019. Luxembourg's startup investment volume grew by an even higher percentage: 575 percent in 2019, when compared to 2018.

Are there many foreign investors in the Benelux?

In all three countries, the outflow of foreign direct investments (FDI) outweighs that of the inflow. Dutch residents, for example, were responsible for nearly 125 billion euros worth of direct investments in economies outside the Netherlands in 2019, whereas non-resident investors sent around 84 billion euros worth of direct investments towards the Dutch economy. This does not mean that foreign investment projects do not occur. The United States was Belgium's largest foreign investor in 2018, for example, as it was responsible for roughly 50 of the 278 projects started that year. France and the Netherlands, which (partially) share the main languages found in Belgium, were the second and third investor that year.

Venture capital investments in Belgium more than doubled in 2018, and continued to grow by around one percent in 2019. This has a catch, however, as the 2019 figure was influenced by a 100 million U.S. dollars investment round in data intelligence company Colibra, the largest single round in Belgium. The same was true for the Netherlands. Venture capital investments in the Netherlands originating from foreign firms decreased by more than 20 percent in 2019. Domestic VC investments, however, reached their highest-recorded value that year. Private equity was more common than venture capital, but in a different way. Both sales to other firms and sales to third parties were the most common exit strategies for private equity in the Netherlands in 2019. One of the best-known examples of such a company in the Netherlands, which was acquired by an investment group with the purpose of being sold on for profit, is retailer HEMA.
This text provides general information. Statista assumes no liability for the information given being complete or correct. Due to varying update cycles, statistics can display more up-to-date data than referenced in the text.
Published by Statista Research Department, Jan 7, 2022

Value of startup investments in the Netherlands
4.4bn EUR

Startup investment value in the Netherlands 2016-2021

Biggest start-up cities in Europe 2015-2021, by value of investments 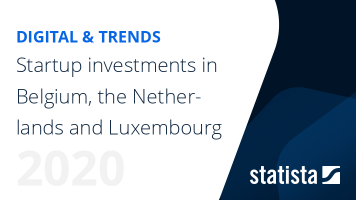 Go to report Startup investments in the Benelux
Top Seller

The most important key figures provide you with a compact summary of the topic of "Startup investments in the Benelux" and take you straight to the corresponding statistics.