The COVID-19 pandemic has impacted people around the world in many different ways. As of January 9, 2023, there had been almost 669 million COVID-19 cases worldwide and around 6.7 million deaths caused by the disease. In addition, the pandemic has had a serious impact on the global economy and personal finances, and lockdowns and restrictions put in place to slow the spread of the disease have severely disrupted the lives of billions of people. All of this, the novelness and unpredictability of the pandemic, the loss of life, financial insecurity, and lockdowns, have contributed to one of the largest consequences of the pandemic: an increase in emotional and psychological challenges. Millions of people have suffered feelings of worry, stress, loneliness, anxiety, and depression because of the pandemic, with one survey finding that citizens from France, Germany, the United Kingdom, Italy, Canada, the United States, and Japan were more likely to report the pandemic has affected their psychological health than their personal economic situation, physical health, or professional ambitions. In addition, at times, the pandemic has resulted in limited access to mental health services resulting in many of those suffering from such issues with no easy access to help.
Although vaccines have lessened the impact of COVID-19 and many countries no longer have strict measures against the disease, many people still feel the mental health effects of the pandemic. The experience, especially in the first year of the pandemic, has been a traumatic event for many, that has forever changed lives. The short term and long-term effect the pandemic has had on mental health should not be underestimated. Perhaps one positive outcome of the pandemic however, has been a global focus and more public discourse on mental health. Yet, only time will tell how the pandemic will ultimately impact how mental health is discussed, addressed, and treated in different regions around the world.

Anxiety and depression are two of the most common mental health disorders worldwide. Although only around four percent of people globally are estimated to have an anxiety disorder and a little less than four percent are thought to have depression, symptoms of these disorders are extremely common. Symptoms of anxiety can include feelings of panic or fear, an increase in heart rate, and muscular tension, while depression is characterized by feelings of low mood, a lack of motivation and enjoyment, and a decrease in energy levels. The symptoms of both disorders can be mild, or they can have a significant impact on a person's well-being by affecting sleep, concentration, appetite, social interaction and/or the ability to carry out daily activities. A report published by the OECD in May of 2021 analyzing 15 countries, found that in every country the prevalence of anxiety or symptoms of anxiety had increased due to the COVID-19 pandemic. For example, while 19 percent of people in the United Kingdom reported they suffered from anxiety or symptoms of anxiety before COVID-19, around 39 percent reported so in March and April of 2020. The report noted similar findings concerning depression, with around eight percent of people in Japan reporting they suffered from depression or symptoms of depression before the pandemic compared to 17 percent of people in 2020. Furthermore, a report from the WHO found that in 2020 many countries reported disruptions in mental health, neurological, and substance abuse related services such as those for older adults, critical harm reduction, and overdose prevention and management.

The mental health impact of COVID-19 in the United States

As with many other countries, people in the United States have reported worsened mental health and increased feelings of anxiety and depression due to the pandemic. Since April 2020, the CDC has surveyed a sample of the U.S. population every week or so to monitor changes in symptoms of anxiety and depression. Symptoms of both have fluctuated over the course of the pandemic as cases have risen and fallen and lockdowns and restrictions were enacted and then loosened. Symptoms of anxiety hit highs in the fall of 2020 when up to 37 percent of respondents reported such symptoms. Symptoms of depression have followed a similar trend with 30 percent of respondents reporting symptoms of depression in December of 2020. Throughout the pandemic, symptoms of anxiety and depression have been more common among women than men in the United States. Younger people have also been more likely to report adverse mental health symptoms than older people. For example, in June 2020, almost 75 percent of those aged 18 to 24 reported one or more adverse mental or behavioral health symptoms, compared to 52 percent of those aged 25 to 44 and 30 percent of 54- to 64-year-olds.
This text provides general information. Statista assumes no liability for the information given being complete or correct. Due to varying update cycles, statistics can display more up-to-date data than referenced in the text.

John Elflein
Research expert covering health and health care
Get in touch with us now
Published by John Elflein, Jan 12, 2023

Workers worldwide who report being extremely mentally challenged after COVID-19
14.4%

Percentage of adults in the U.K. reporting stress, anxiety, or sadness since COVID-19
26%

Respondents in India who report feeling down, depressed, or hopeless during the pandemic
44%

Substance use and suicidal ideation 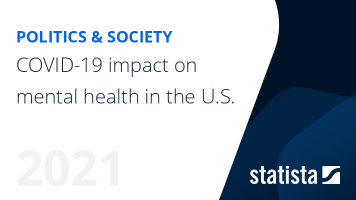 Go to report Impact of the COVID-19 pandemic on mental health in the U.S.
Top Seller

The most important key figures provide you with a compact summary of the topic of "COVID-19 and mental health" and take you straight to the corresponding statistics.