Published by
Eloise Trenda,
Jan 24, 2022
Whether it is chicken covered with the famous “mole poblano” sauce, tacos, or pozole, some of the most representative dishes in Mexico typically include some kind of meat. Tacos al pastor, for instance – one of consumers’ preferred kind of tacos - use pork as its main ingredient, while other favorites such as “tacos de bistec” and “tacos de carne asada” also include meat. Following a high demand, the Mexican meat industry sells more than three times what tortillas or dairy do. Though this figure includes both domestic and international sales, local consumption is even higher in terms of value, as imports of meat have close to doubled its exports in recent years.

What kind of meat do Mexicans consume?

Poultry is by far the most widely consumed kind of meat in Mexico. In average, close to 30 kilograms of poultry are eaten per person every year. In comparison, average per capita consumption of pork - the second most preferred type of meat - amounts to less than half of that volume. As a result, quarterly expenditure on poultry meat in the Latin American country reached nearly 25 billion Mexican pesos in 2018, close to two billion pesos more than that of beef, and 15 billion more than that of pork. Furthermore, poultry demand is increasing and with it, production. Chicken meat production in Mexico, for instance, grew by 28 percent in less than one decade.

And what are the characteristics of the Mexican poultry consumer? While not specifically for poultry, according to a 2020 survey, more than half of meat adult consumers in Mexico were less than 35 years old, most of them between the ages of 25 and 34. Concerning gender, both women and men enjoyed eating meat, with a slightly higher share of men among meat consumers. As for income level, the share of meat eaters with a high income was equal to 37 percent, two and nine percentage points higher than the share of those with a medium and low-income level, respectively.

The Mexican multinational meat companies Sigma Alimentos and Bachoco, were among the leading food and beverages enterprises in 2018, based on sales value. While both present in the meat industry, the multinationals cover different segments. Sigma Alimentos' main focus is on a variety of cooked and dried meats, whereas Bachocos’ specialty is poultry. Its poultry production has led Bachoco to be considered as one of the main meat producers worldwide, next to companies such as JBS and Hormel Foods. In addition, the Mexican multinational was also recognized as one of the most reputable in the food and beverages industry in the country, with other well-known food brands such as Bimbo and Nestlé.

In the following 5 chapters, you will quickly find the 26 most important statistics relating to "Meat industry in Mexico". 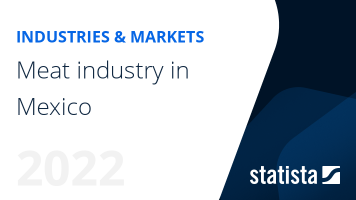 The most important key figures provide you with a compact summary of the topic of "Meat industry in Mexico" and take you straight to the corresponding statistics.