As the food sector tends towards more industrialized offerings with higher crop yields and ready-to-eat meals, more and more consumers opt for more natural, less processed products. As a result, an increase in the offer of health and wellness commodities has been observed in the past years. When it comes to fresh produce, the preference for organic products has become the top choice of an increasing number of consumers around the world, and Mexicans are no exception.
Though the market is still largest in Brazil, retail sales of organic packaged food in Mexico have been increasing in previous years, reaching nearly 32 million U.S. dollars in 2019. Segments such as dairy, soy-based food, pasta and noodles are among the most consumed organic packaged products in the North American country, followed by other popular goods such as natural beverages and savory snacks. Specialized in dairy and soy products, Grupo Industrial Cuadritos Biotek, a Mexican food company, and Unifood International (S) Pte. Ltd. stand out as the leading organic packaged food selling companies in the local market.

Organic products grown in the country are not only consumed domestically, but widely sold abroad. In 2018, Mexico was the leading exporter of organic food in Latin America, followed by South American countries including Peru and Chile. Contrary to expectation, the organic goods with the highest volume of production for export are not coffee and avocado, but berries, such as raspberries and strawberries.
This text provides general information. Statista assumes no liability for the information given being complete or correct. Due to varying update cycles, statistics can display more up-to-date data than referenced in the text. 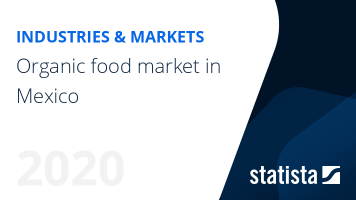 The most important key figures provide you with a compact summary of the topic of "Organic food market in Mexico" and take you straight to the corresponding statistics.