Published by
Eloise Trenda,
Aug 23, 2022
Few things represent the history and diversity of the Mexican culture as much as gastronomy. Considered an intangible cultural heritage of humanity by UNESCO, Mexican cuisine cannot only be found in cookbooks, or restaurants, but also on the tables of the country’s more than 127 million inhabitants. In Mexico, food fulfills more than just a nutritional purpose - it is an essential element of many local festivities, and a fundamental part of social gatherings with friends and family. The food industry of this Latin American country mirrors its people’s traditional approach to everyday meals, with some of the favorite local dishes such as tacos and quesadillas enjoyed as much at home, as they are in restaurants or street-food establishments.
Corn is the most eaten staple among Mexican consumers. It is the base ingredient of tortillas, a type of slim flatbread and, one of the most representative and widely consumed food products in the country, used for the preparation of both tacos and quesadillas. In 2020, tortilla sales in Mexico reached a value comparable to that of dairy at more than 59 billion Mexican pesos.

Along with tortillas, meat is the main ingredient in most tacos. One of the most popular tacos, tacos al pastor, uses pork marinated in a special chili sauce. This kind of taco is particularly known for being cooked on a vertical rotisserie. Poultry, beef, and occasionally even seafood are other common fillings in tacos. Following a high demand for meat, animal slaughtering and processing generates over two and a half times more sales value than the tortilla or the dairy industries.

Fresh produce is also vital to Mexico’s food culture, with green chili ranking as the country’s most consumed vegetable per capita. As “salsa” accompanies most dishes, salsa ingredients such as tomato and onions are also highly popular. Other favorites include avocados, beans, and nopales, a local species of cactus. Citruses such as limes and oranges are widely eaten, and tropical fruits like banana, mango, and pineapple, are also common choices.

Food companies in Mexico adapt to these local preferences, with brands such as La Costeña, Herdez, and Doña María offering a wide variety of salsas and canned chilis. The leading food brands in terms of consumer reach, however, specialize in starches: Bimbo, from the multinational company Grupo Bimbo, is known for bakery products, and La Moderna produces pasta. Grupo Bimbo, along with other corporations such as FEMSA and Sigma Alimentos, is one of the leading companies in the food and beverage market, reporting a net income of close to 16 billion Mexican pesos in 2021.

In the following 5 chapters, you will quickly find the 27 most important statistics relating to "Food industry in Mexico". 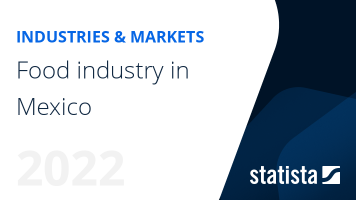 The most important key figures provide you with a compact summary of the topic of "Food industry in Mexico" and take you straight to the corresponding statistics.