Published by
C. Simionato,
Nov 17, 2022
In most people’s minds, toys and games are usually related to children’s activities. In the consumer market realm, however, they refer to products destined for hobbies and leisure activities of both young and adult consumers. Toys and games can, among others, include dolls, stuffed animals, balls, wheeled toys, puzzles, billiards, cards, casino equipment, toy musical instruments, and video games. Worldwide, this market’s revenue amounts to more than 382 billion U.S. dollars, with a great part of it being generated by China, India, and the United States.

In Latin America, Brazil constitutes the largest toy and hobby market, as its revenue is considerably higher than Mexico's. In the international trade arena, however, Mexico outstrips any other regional competitor by supplying nearly 90 percent of Latin America’s toy exports while absorbing more than 40 percent of its imports.

With China being the world’s leader in toy exports, logically most of Mexico’s toy imports stem from this Asian giant. In 2020, Mexico imported Chinese toys worth more than twice the combined import value of its remaining nine major source markets. As for the Mexican toy export trade, the United States has become Mexico’s most important partner by taking in most of its exports.

The role of the toy industry in Mexico’s secondary sector

The number of toy manufacturing companies in Mexico has remained stagnant during most of the 2010s. Nonetheless, the industry’s workforce is on a downward trend since 2017. As of 2020, the number of people employed in the toy manufacturing industry stood at just under 10,000 employees, compared to the nearly 12,000 workers who were tallied in the previous years.

This negative trend has also been reflected in the country’s total toy output value, which has constantly been declining since 2017 and worsened in 2020 due to the COVID-19 pandemic. Although 2021 showed a slight increase in the output in comparison to the previous year, it still represented less than pre-pandemic years, and considerably less than five years before. Prior to the crisis, the products' main destination was the national market, yet the lifejacket for the Mexican toy manufacturers appears to be outside its borders.

In the following 5 chapters, you will quickly find the 26 most important statistics relating to "Toys and games in Mexico". 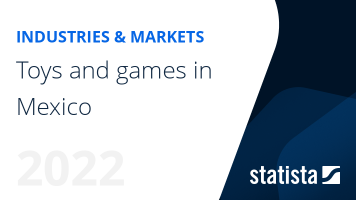 The most important key figures provide you with a compact summary of the topic of "Toys and games in Mexico" and take you straight to the corresponding statistics.