Published by
Saifaddin Galal,
Oct 26, 2021
The coronaviruses are a family of viruses that get their name due to the crown-like spikes on their surfaces. They are known to cause illnesses ranging from a mild cold up to more severe respiratory diseases like the Middle East Respiratory Syndrome (MERS) and the Severe Acute Respiratory Syndrome (SARS). The novel coronavirus (SARS-COV-2), publicly known as COVID-19, was first identified in the Chinese city of Wuhan by late December 2019. As of October 2021, almost two years after the virus was first recognized, it had already infected more than 244 million people around the world, and over 8.39 million on the African continent.

The pandemic in South Africa

On the March 5, 2020, South Africa declared its first novel coronavirus (COVID-19) case, a 38-year-old male who came back from Italy along with his wife and two children. As of October 24, 2020, South Africa had registered over 2.9 million infections and 88.9 thousand mortalities, making it the most affected nation on the African continent. Gauteng in the Johannesburg province, was the most affected with over 918.9 thousand cases. KwaZulu-Natal, and Western Cape followed with more than 515.2 thousand and 513.2 thousand infected individuals. As of June 7, 2021, Western Cape registered over 11.8 thousand deaths, followed by Eastern Cape.

The coronavirus (COVID-19) pandemic is predicted to negatively affect the South African economy due to the restrictions and lockdowns conducted by the government to try to control the infection rate. On March 23, 2020, the first national lockdown was announced and took effect a few days later on March 27. As of December 2020, the real GDP growth for the county was estimated to drop by 8.2 percent in 2020. However, the economy is projected to take off in 2021 and 2022 with real GDP growth rates of three and 1.6 percent, respectively.

The impact on businesses

According to a survey conducted in April 2020, the pandemic is expected to have a dire effect on businesses, with up to 38 percent claiming to have seen an effect on imports. Moreover, 85 percent of businesses surveyed indicated they could survive up to three months without revenue, of which, in turn, approximately 30 percent claimed they can only survive for up to one month. Prices also saw a surge, over 30 percent of businesses claimed. The workforce is also facing extreme challenges after one-third of the businesses indicated that they would decrease their employee numbers in the short term to be able to cope with the financial fallout from the pandemic.

South Africa started its vaccination campaign on February 17, 2021. In early February 2021, the country managed to secure one million AstraZeneca/Oxford vaccines. However, these were later put on hold due to their ineffectiveness towards the more contagious variants of the virus (such as the beta and the alpha variant). The country administers the Johnson & Johnson (J&J) vaccines and the Pfizer/BioNTech vaccine. As of late October, around 21.3 million doses of Covid-19 vaccine have been administered. Moreover, the total number of individuals who either received one jab of J&J or one jab of Pfizer/BioNtech amounted to 14.8 million individuals of which females were the majority. Moreover, the oldest age group had the highest share of its population vaccinated at around 54 percent of the population as of late October.

For further information about the coronavirus (COVID-19) pandemic, please visit our dedicated Facts and Figures page and our Trend Whitepaper.

In the following 5 chapters, you will quickly find the 26 most important statistics relating to "Coronavirus (COVID-19) in South Africa". 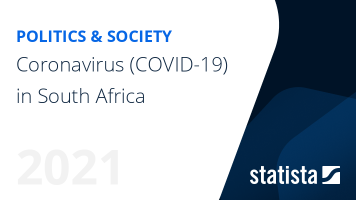 The most important key figures provide you with a compact summary of the topic of "Coronavirus (COVID-19) in South Africa" and take you straight to the corresponding statistics.

Coronavirus (COVID-19) in the Middle East and North Africa

Saifaddin Galal
Research Expert covering the economy and society on Egypt, South Africa, and Ethiopia
Get in touch with us now