In Australia, consumers’ appetites for electronic devices have aligned with current global trends. The most common consumer electronic device that Australians own are smartphones, followed by TVs, laptops, and headphones. Growth in the consumer electronic market continued despite the global coronavirus pandemic. The ways Australians purchase these goods were impacted by strict lockdown measures, forcing many retailers to close their physical stores for a period. This expanded the online retail market, which has previously fallen behind the offline market in terms of sales channels.

Where are Australians purchasing consumer electronics?

The major offline retailers are JB Hi-Fi, the Good Guys, and Harvey Norman. With JB Hi-Fi’s acquisition of the Good Guys in 2016, the Australian retailer has cemented its dominance in Australia's consumer electronics and home appliance market. The sales revenue of JB Hi-Fi reached almost nine billion Australian dollars in financial year 2021. Harvey Norman mainly operates as a franchise, selling consumer electronics and other homewares.

The leading online retailers in the market are Apple and JB Hi-Fi. Australian consumers have demonstrated their affinity for Apple smartphones, with Apple devices making up over half of the share of mobile phones. Recently, consumers have turned to the global e-commerce platform Amazon for their electronic device needs. The retail giant conveniently offers a wide range of consumer products with fast shipping and has continued its expansion in the country. Amazon has fulfillment centers in Melbourne, Sydney, Brisbane, Adelaide, and Perth, with expansion plans underway.

The Statista Global Consumer Survey revealed the most popular brands for various consumer electronic devices in Australia. Many Australians use audio devices, with consumers more likely to own Sony, Bose, and JBL branded speakers than other brands. Regarding personal headphones, Apple, Bose, and Beats led this segment. Apple ranked on top in terms of laptops, with other common brands owned by consumers including HP, Acer, and Dell. For televisions, Samsung was the leading brand, with LG trailing behind.

The revenue of the consumer electronics market in Australia is projected to reach over eight billion U.S. dollars by 2025. Along with increasing revenue, the consumer electronic penetration rate is also set to continue rising. While laptops, smartphones, TVs and game consoles still come out on top, smart home devices are also making a splash in the market. As the functionality of these smart devices continues to develop, consumer preferences for these products will likely continue expanding.
This text provides general information. Statista assumes no liability for the information given being complete or correct. Due to varying update cycles, statistics can display more up-to-date data than referenced in the text.
Published by L. Granwal, Jul 15, 2022 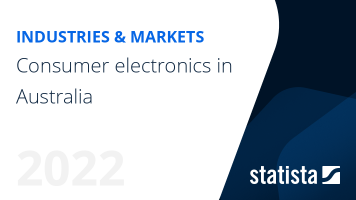 The most important key figures provide you with a compact summary of the topic of "Consumer electronics in Australia" and take you straight to the corresponding statistics.