Like in other European countries, television consumption in Spain has been decreasing for several years. In 2021, around 83 percent of the population stated to watch TV daily, down from over 88 percent a decade earlier. Television also seems to be more prevalent among older generations, recording figures of around 93 percent of daily viewers aged 75 or older. In contrast, only 76 percent of viewers aged 14 to 19 years old said they watched TV on a daily basis. Unlike age, the socioeconomic status of a person does not appear to be a fundamental factor in television viewership, with the latest reports revealing figures of over 80 percent across nearly all groups.

In Spain, not only has TV consumption experienced a decrease in popularity, but also in the actual time spent watching broadcasts per day. Taking the highest record as a reference, Spaniards have reduced the amount of time they spend in front of their televisions a day per person, from 246 minutes registered in 2003 down to 208 in 2021.
Spain has a favorite television genre and that is fiction, which held about 42 percent of the airing time in the country in 2021. Also that year, the most watched television channel was Telecinco, a Mediaset-operated station that had an audience share of nearly 15 percent, ahead of Atresmedia’s Antena 3 and state-owned La1.

The average information consumer may be gradually turning their backs on television, but TV advertising expenditure in Spain is expected to increase by over 300 million euros from 2020 to 2022. Furthermore, after a decline of free TV advertising revenue by 2020, TV commercials generated roughly 100 million euros more in revenue in 2021 compared with the previous year.
Viewing habits are undeniably shifting. With the rise of handheld devices also comes a more demanding and hard-to-please audience that prefers to pay for TV and video services to watch the shows they want whenever and wherever they wish.
This text provides general information. Statista assumes no liability for the information given being complete or correct. Due to varying update cycles, statistics can display more up-to-date data than referenced in the text.

Julia Stoll
Research expert covering TV and video media
Get in touch with us now
Published by Julia Stoll, Jun 21, 2022

Number of households with a TV in Spain
18.9m 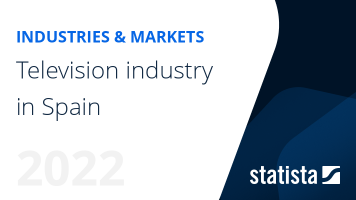 The most important key figures provide you with a compact summary of the topic of "Television industry in Spain" and take you straight to the corresponding statistics.