The financial technology (fintech) sector is a growing industry that uses technologies to improve and automate financial services for consumers and businesses. It enables digital payments, online financial management, trading, and other banking transactions that used to be carried out exclusively in physical branches. In Chile, the startup and fintech sectors have experienced a boom in recent years, attested by a continuous rise of venture capital investments. Although the Chilean fintech industry is smaller compared to regional neighbors, the country's alternative finance market is one of the largest in Latin America.

The fintech universe in Chile is primed for growth. The number of fintech startups established in the Andean country more than doubled in the last four years, amounting to over one hundred companies in 2019. Most of these fintech businesses are concentrated in the capital city, Santiago. With more than four fintech companies per one million inhabitants, Chile's fintech density is the highest among other leading Latin American markets.

However, the Chilean fintech ecosystem is still in a nascent stage. Nearly eight out of 10 companies are small businesses, with no more than 25 employees. Also, most fintechs founded in the country were able to scale up thanks to investments received from third parties. Yet, Chilean fintechs gathered investments equivalent to only one third of the amount received by Colombian fintechs, or a mere four percent of fintech investments registered in Argentina.

Fintech demand on the rise

The irruption of fintech companies in Chile has been followed by positive consumer response. Fintech adoption has expanded to two thirds of the entire Chilean population, a similar percentage as other major players in the region. Digital payments is one of the segments driving fintech growth in the country. This sector is expected to make up for the majority of fintech customers, with more than 15 million users forecast by 2023.
This text provides general information. Statista assumes no liability for the information given being complete or correct. Due to varying update cycles, statistics can display more up-to-date data than referenced in the text.
Published by Statista Research Department, Jun 7, 2022

Number of fintech startups in Chile
179 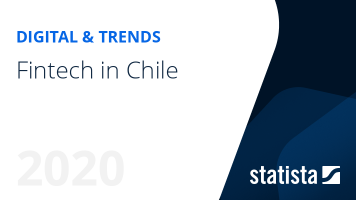 The most important key figures provide you with a compact summary of the topic of "Fintech in Chile" and take you straight to the corresponding statistics.