Published by
Daniel Slotta,
Apr 8, 2022
Taiwan’s development is closely intertwined with the technology industry. In the 90s, the region’s expanding economic growth kickstarted the Taiwanese electronics industry and improved the living standard of its citizens. Today, Taiwan is an integral part of the global electronics supply chain and a producer of a wide variety of electronic goods.

Computers and smartphones are the main products of Taiwan’s consumer electronics manufacturing sector. Notable internationally recognizable brands include the PC manufacturers Asus and Acer, as well as the mobile phone manufacturer HTC. Most of Taiwan’s electronics industry has been focused on intermediary products, such as circuit boards and semiconductors and the country is home to the world’s largest semiconductor manufacturer. This environment has been beneficial for the development of consumer electronics with processing power, like computers and smartphones.

Acer and Asus have been successful in manifesting their global market position whereas HTC has not had the same level of international markted success. In the early stages of the smartphone trend, HTC was one of the first movers and had a global market share of around 10 percent. After 2012, the brand lost its position, around the same time smartphone brands from mainland China emerged. In contrast to that, Taiwan’s notebook brands have maintained a stable market share for the past 10 years. Acer and Asus both occupy around seven percent of the global PC market.

Comparable to the consumer behavior of other APAC countries, mobile phones are the most used electronic devices in Taiwan. For accessing the internet, watching movies, or playing games, the smartphone is the device of choice. When it comes to brand selection, Taiwanese consumers preferred foreign smartphone brands, such as Apple. Whereas domestic manufacturer HTC not only lost global market share but also its popularity declined in the domestic market too.

As smartphones become more powerful, they displace PCs as the leading gaming platform. For some time, online games are becoming less of a niche market and have now entered the mainstream, becoming a preferred gaming medium for all genders. However, the age groups with the largest share of online gamers are unsurprisingly the younger generations. The convenience of mobile gaming online has likely been a significant factor in its increasing popularity with the low barrier of entry for mobile games opening up the genre for a broader audience. In addition to mobile phones, desktop PCs remain a popular platform for gaming.

In the following 7 chapters, you will quickly find the 34 most important statistics relating to "Consumer electronics in Taiwan". 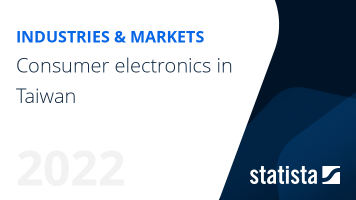 The most important key figures provide you with a compact summary of the topic of "Consumer electronics in Taiwan" and take you straight to the corresponding statistics.