The gaming industry has developed in leaps and bounds in China. With 666 million players spending an average of 445 yuan each on video games, China boasts the world's most lucrative gaming market. On one side, rising consumer spending and active investment activities have effectively spurred game entertainment and home console industry development. Given that Chinese authorities have announced stricter regulations in recent years, China’s gaming dominance is expected be overtaken by the United States.

The gaming scene in China

Over the last decade, China’s gaming revenue saw a more than six-fold increase and passed the 296 billion yuan mark in 2021. It comes as no surprise that mobile games have become the industry pillar because of their immense popularity. A significant chunk of the new games launched in China were mobile games. In terms of gaming revenue, mobile games ranked first, controlling over 76 percent of market share in 2021. Client games took up the second place with a market share of about 20 percent. Browser-based, home console, and other games accounted for only four percent altogether. In terms of genres, role-playing games remained the lead, while card games were on the rise.

Who are hitting the gold coins?

Due to challenging regulations and cultural gaming preferences, it is relatively hard for international gaming giants to succeed behind the Great Firewall. In this context, Tencent remained the leading game publisher in the Chinese arena, holding more than half of the market share in 2019. Its Honor of Kings, Peacekeeper Elite, and PUBG Mobile have long been in the highest-grossing charts. In contrast, Tencent’s imminent domestic rival NetEase occupied a market share of about 17 percent with well-known games like Minecraft, Onmyoji, and Harry Potter: Magic Awakened. Other relatively new entrants like 37 Interactive Entertainment and Perfect World have gained a toehold in the gaming market.

It is worth noting that shifting game approvals and content restrictions have posed persistent challenges to all game developers and publishers in China. After a nine-month on new video game licenses in 2018, the Chinese authority has imposed another eight-month freeze starting from July 2021. Furthermore, restrictions which were announced in 2019 previously to curb video game addiction among gamers under 18 have been tightened. Game content guidelines have been updated as well to eliminate any content that is considered to be inappropriate by the authorities, such as games with blurred moral boundaries or "politically harmful" content. A self-regulation pact was signed by 213 video game companies in September 2021.

Unlock the next level

All these measures have had an immediate impact on the gaming industry, reflected clearly in the continuous slowdown in game users after the peak in 2011. However, the long-term effects will be limited as players under-16 accounted for merely three percent of China's gaming revenue. On the other side, the rise of adult female gamers, eSports, and cloud gaming have proved to be viable new revenue streams. Industry experts projected that the average revenue per game user would continue to expand in the coming few years, while technology advancements in 5G, augmented, and virtual reality (AR/VR) would revolutionize the gaming experience.
This text provides general information. Statista assumes no liability for the information given being complete or correct. Due to varying update cycles, statistics can display more up-to-date data than referenced in the text.
Lai Lin Thomala
Research expert covering Greater China
Get in touch with us now
Published by Lai Lin Thomala, May 4, 2022 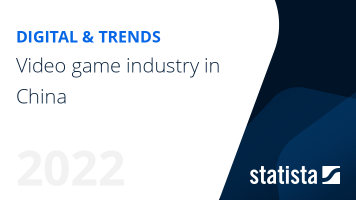 The most important key figures provide you with a compact summary of the topic of "Gaming in China" and take you straight to the corresponding statistics.