Artificial intelligence (AI), the technology that allows digital computers or computer-controlled robots to perform tasks commonly associated with intelligent beings, has been the subject of people’s imagination for decades. Although human-like androids such as those portrayed in the science fiction movie Blade Runner are still far from reality, applications of AI such as smartphone virtual assistants and industrial robots are already widespread in our society and make our life more convenient. Given AI’s powerful ability to improve efficiency and increase productivity, it is of strategic importance to countries and governments that are competing to get ahead in the AI race. The United States, being the only superpower in the world, is naturally advantaged in this race and has been in the lead.

AI spending and funding in the U.S.

In 2021, the North American AI market is projected to amount to 20 billion U.S. dollars in revenues, accounting for the bulk of worldwide AI spending. Funding in AI startups in the U.S. has climbed to and stayed at a high level, reaching 4.7 billion U.S. dollars in the third quarter of 2020 alone. The most noteworthy U.S. AI startups that have secured large amounts of funding include UiPath, a New York company that specializes in robotic process automation (RPA), and Nuro, a Californian robotics company that develops autonomous delivery vehicles.

U.S.’s advantage in the AI race

The U.S. has a clear advantage in the race to become an AI superpower. More than half of top-tier AI researchers work at a U.S. institution and U.S. tech giants such as IBM and Microsoft are among the largest AI and machine learning (ML) patent owners. As such, the U.S. is ranked as the country with the highest readiness to implement AI in the public sector with an average score of 85.48 out of 100, scoring particularly high in the categories of AI vision and AI governance and ethics.

Rivalry between U.S. and China

There is no overlooking China when talking about AI and the U.S. As China has come to challenge the U.S.’s role as the most powerful country in the world, AI, with its strategic importance, has become a hotly contested field between the two countries. The list of largest AI and ML patent owners mentioned earlier, despite testifying to the American supremacy in the field, also bears witness to the incredible rise of Chinese institutions and companies. The Chinese Academy of Sciences is the Chinese institution with the most AI/ML patents, falling just shortly behind Microsoft. A group of other Chinese companies such as the State Grip Corp, Baidu, and Tencent have transformed from newcomers to powerful players in just a few years. As the U.S.-China rivalry keeps unfolding across different dimensions, AI might be the area to look to as many believe it to be where highly consequential contests will take place.
This text provides general information. Statista assumes no liability for the information given being complete or correct. Due to varying update cycles, statistics can display more up-to-date data than referenced in the text. 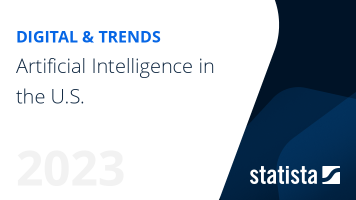 The most important key figures provide you with a compact summary of the topic of "Artificial Intelligence (AI) in the United States" and take you straight to the corresponding statistics.