While previous generations might have lived with one or two pairs of functional shoes, today most people own a collection that meets various criteria and needs. Formal, leather, casual, athletic: shoes come in a wide variety of shapes, styles and sizes. In 2020, the French footwear market achieved a turnover of almost nine billion euros. Slightly more than half of the shoes produced in France were intended for urban and casual use. Among them, sneakers, derived from shoe models designed for sports, and diverted to urban and daily use, are very popular with the French. In 2020, 196,000 pairs of sports shoes were manufactured in France, and over 26,000 tons were imported.
The largest manufacturers of these sports shoes, however, are mostly located across the Rhine, where the companies Adidas and Puma have their headquarters. Adidas France's sales had exceeded 660 million euros in 2020, compared to about 213 million for its competitor Puma France. Another leader in athletic footwear is the U.S. company Nike, with sales in France were worth more than 90 million euros in the previous year.

In terms of footwear distribution, Vivarte (formerly the André Group) is one of the leaders on the French market. Including stores such as Minelli, San Marina, and La Halles aux Chaussures, the group had more than 2,000 points of sale in 2018, and turnover, although down since the sale of the La Halles stores, was approximately 265 million euros in 2020.

This substantial drop in the turnover of specialized retail chains can also be partly explained by the closure of physical stores due to the coronavirus (COVID-19) pandemic, which has favored large e-commerce platforms, such as Amazon or Cdiscount, whose turnover has experienced significant growth during the crisis. However, it is interesting to note that, apart from 25-34-year-olds, the French planned to shop more in physical stores than online after the lockdown.
This text provides general information. Statista assumes no liability for the information given being complete or correct. Due to varying update cycles, statistics can display more up-to-date data than referenced in the text.
C. Simionato
Research expert covering DIY, home improvement and furniture retail
Get in touch with us now
Published by C. Simionato, Jan 11, 2022

Number of footwear companies in France
86

Most produced footwear items in France
Fashion and casual footwear 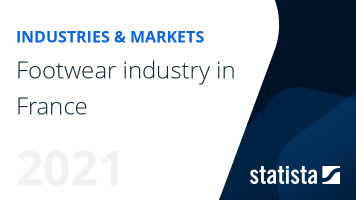 The most important key figures provide you with a compact summary of the topic of "Footwear market in France" and take you straight to the corresponding statistics.