Published by
Amy Watson,
Jun 23, 2021
The book market in Scandinavia is not dissimilar to others in Europe in that digital books are now growing in popularity but print remains a popular format. Book format preferences tend to vary across age groups, with children often preferring physical books to digital alternatives. To take the market in Norway as an example, over 40 percent of Norwegians aged nine to 12 years old report reading printed books on average day, compared to just 12 percent of adults between 20 and 24 years. When it comes to digital books, audiobook listening in Norway is on the up. The latest data shows that almost 30 percent of Norwegian readers have listened to at least one audiobook, whereas the e-book arm of the industry has yet to gain traction.

Surveys on consumption confirm that e-books are far from the preferred option for Scandinavian book readers. E-book reading frequency in Denmark is low, with most Danes never having read an e-book or only opting to read one very occasionally. In Norway, despite an annual increase in audio book listening and regular daily print book readership, less than seven percent of all consumers aged between nine and 79 years old typically read e-books on an average day.
The same is true of Swedish book readers – the share of consumers who read e-books daily is under five percent across all age groups and most consumers have never used the format. This may come as a surprise given that publisher sales revenue from e-books in Sweden has climbed consistently over the last decade, but is also proof that sales growth does not necessarily translate to more frequent engagement. What is clear is that the e-book segment of the Scandinavian book market needs time to mature before the format will be as ubiquitous as print.

Book revenue: Scandinavia vs. the rest of the world

The majority of book revenue in Scandinavia is still derived from physical books. In Denmark for example, digital book sales revenue has been slow to develop. In recent years, total book sales revenue in Denmark has hovered around 1.7 billion Danish kroner, just under 400 million of which was accounted for by sales of digital books. A similar pattern can be seen in Norway. The total Norwegian book market is worth around five billion Norwegian kroner, and whilst the sales revenue of physical and digital audiobooks in Norway is rising each year, the figure has thus far failed to surpass 180 million NOK.

Markets outside of Scandinavia also remain largely reliant on physical book revenue. More than half of total book sales revenue in the United States comes from hardback and paperback sales, and in the United Kingdom the gap between physical and digital sales revenue is even greater. Data on book revenue by format in the UK reveals that digital growth has been slow and unsteady and physical revenue remains four times higher, and over in Russia, the market volume of electronic books and audiobooks is around 12 times lower than that of paper book sales. Whilst preferences for different types of electronic books varies globally, it will be some time before printed book sales are negatively impacted by their digital counterparts, not only in Scandinavian countries but also in many others around the world.

In the following 3 chapters, you will quickly find the 20 most important statistics relating to "Book market in Scandinavia". 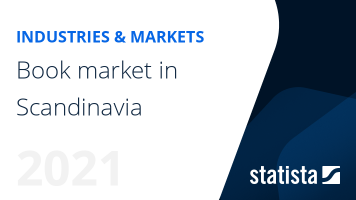 The most important key figures provide you with a compact summary of the topic of "Book market in Scandinavia" and take you straight to the corresponding statistics.