Published by
Amy Watson,
Nov 29, 2021
Data on the largest book publishers worldwide ranked by revenue revealed that four of the top five were European publishers, with RELX Group, Bertelsmann, Pearson, and Wolters Kluwer each generating between four and six billion U.S. dollars worldwide in 2020. In terms of individual sellers, however, certain European countries fared better than others when it came to sales. Between 2019 and 2020, book sales growth among individual booksellers in Italy, Slovakia, and Portugal declined by 15 percent or more, whereas Sweden, Ireland, and Norway fared the best among all European booksellers in the study.
Book buying habits are changing, with more consumers going online rather than shopping at brick-and-mortar stores. To take e-books as an example, a report investigating book consumption in the United States, the United Kingdom, and Germany revealed that whilst Amazon was the preferred e-book purchasing channel, e-book buying behavior differed somewhat across countries.

The study mentioned above showed that Germans were significantly more likely to buy e-books from online bookstores than respondents from the United Kingdom. In addition, the compound annual growth rate of e-book revenue between 2010 and 2020 was by far the highest in Germany at over 45 percent, whereas the UK’s e-book revenue CAGR stood at just 18.3 percent during the same period.

Despite this, e-books were the third most popular book format in the United Kingdom in 2020, and e-book consumption is overall on the rise. Younger consumers in the UK were the most frequent e-book readers, a trend which was also observed in a study in Italy. Data on e-book readership in Italy by age group found that a substantially higher share of individuals aged 15 to 19 years old engaged with e-books or online books than adults aged 60 or above. In Norway, on the other hand, it was adults between 55 and 66 years of age who were the most likely to read an e-book on an average day.

The rise of audiobooks

Audiobooks have also made an impact in recent years, although as yet, most consumers do not listen exclusively to audiobooks, preferring a combination of book formats. That said, the number of audiobooks sold in Norway increased from just under 590 thousand copies in 2010 to 6.1 million in 2020, and revenue also climbed considerably during that period. Sales revenue from consumer audiobook downloads in the United Kingdom almost doubled between 2018 and 2020. Over in Sweden, 36 percent of adults aged 16 to 85 years old reported listening to audiobooks in their spare time, and for those aged 16 to 29 years, the share was even higher at over 50 percent.

The digital arm of the European book market will continue to grow in years to come, and it is inevitable that more consumers will switch to digital formats or combine them with print. The presence, growth, and popularity of e-books and audiobooks will not necessarily herald the imminent death of print, but on the contrary, will allow publishers more options in terms of what and how they market their offerings to the public.

In the following 4 chapters, you will quickly find the 24 most important statistics relating to "Book market in Europe".

The most important key figures provide you with a compact summary of the topic of "Book market in Europe" and take you straight to the corresponding statistics.

Audiobooks in the U.S.

E-books in the United Kingdom

Book formats in the U.S. 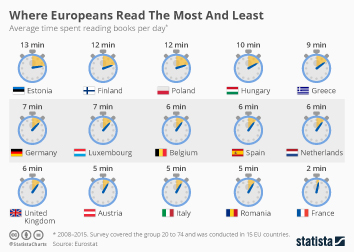 Where Europeans Read The Most And Least