The Philippines has a growing smartphone market, with an estimated 77.1 percent of Filipinos using this device by 2025. Pent-up demand for affordable mobile devices, along with increasing time spent on their smartphones, boosted growth in the Philippines’ smartphones market. Mobile devices played key roles in connecting or fostering relationships, especially in a country divided by over seven thousand islands. As more features were made available to such devices, owning smartphones became crucial to the large population of internet-savvy Filipinos.

In recent periods, low-end brand realme took the lead among other smartphone brands in the Philippines, accounting for over 20 percent of the smartphone market. The Chinese mobile brand offers affordable 4G-enabled smartphones and has also started rolling out 5G devices. Over the years, mobile brands have been partnering with telecommunication companies by offering bundling promos that include getting a device and a mobile subscription, often resulting in increased sales.

The state of the Philippines' network infrastructure

Despite the number of smartphone users in the country, the Philippines’ internet services industry has yet to show improvements on par with its neighbors in the Asia Pacific region. In 2020, the download speed of mobile internet in the Philippines was ranked below Laos and Myanmar at 18.68 Mbps. Internet quality in the Philippines has long been challenged due to the lack of competition in the industry, resulting in limited drive to improve services. Before the launch of DITO Telekom in March 2021, the country’s mobile network sector was dominated by a duopoly between Smart Communications and Globe Telecom. Improvements in internet connection was expected to change with the rollout of 5G connection, which is now available in 98 cities nationwide.

With an average time spent of about 11 hours per day, the internet use of Filipinos had been highest in the Asia Pacific region. Used not only as a communications device, smartphones have also become critical tools in today’s digital economy landscape. Increasingly, smartphone users utilized their devices to purchase goods and services through various e-commerce websites and apps as well as to access and manage their finances via digital banking apps. Smartphones were also the main device used in playing online games and accessing news and information.
This text provides general information. Statista assumes no liability for the information given being complete or correct. Due to varying update cycles, statistics can display more up-to-date data than referenced in the text.
Published by Statista Research Department, Jul 19, 2022

Forecast number of smartphone users in the Philippines
91.48m

Smartphone penetration rate in the Philippines
72%

Smartphone penetration in Asia 2020, by country 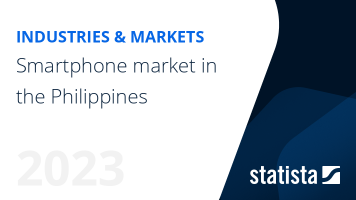 Go to report Smartphones market in the Philippines
Top Seller

The most important key figures provide you with a compact summary of the topic of "Smartphones market in the Philippines" and take you straight to the corresponding statistics.