The constant need for social interaction, especially in a country divided by over seven thousand islands and with an increasing number of overseas workers, were among the leading factors that contributed to the growing number of social network users in the Philippines. On average, Filipinos spent over four hours using social media platforms, which was the highest across the Asia Pacific region. Among others, networking sites such as Facebook, Twitter, and Instagram created a way to connect and bridge distances between family and friends, enabled content creators to share information through digital media, and allowed a broader reach of promotional marketing through online ads.

Social media penetration in the Philippines

Among social media users in the Philippines, Facebook was the most used platform, accounting for almost the entire social media market. Thanks to the Internet.org app introduced by Facebook and Smart Communications Inc. in 2015, Filipino internet users were given free access to a few mobile sites including Facebook and Facebook messenger apps even without a mobile network connection. For many Filipinos, the platform was not only used for social networking but also as a daily source of news, beating newspapers and the radio. Despite Facebook’s popularity in the Philippines, other social platforms such as YouTube and TikTok were gradually gaining space in the market, particularly among content creators. In addition, television networks have also been growing their presence on YouTube, as reflected in the most viewed channels as of August 2021.

Online advertising as a marketing tool

Due to high penetration rates, marketing strategies on social media such as influencer marketing and social commerce are increasingly becoming important among local and international brands hoping to connect to the millions of Filipino online users. By investing in their social media presence, brands gain higher visibility that hopefully translates to increased sales. Aside from paid advertisements, a recent survey points towards the growing popularity of live selling strategies to showcase products such as clothing and food and beverage, especially among local businesses.
This text provides general information. Statista assumes no liability for the information given being complete or correct. Due to varying update cycles, statistics can display more up-to-date data than referenced in the text.
Published by Statista Research Department, Nov 17, 2022

Number of social network users in the Philippines
78.5m

Facebook's market share of the social media market in the Philippines
91.11% 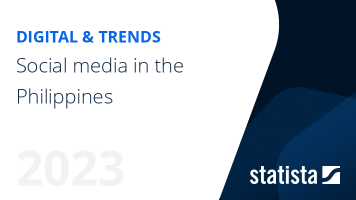 Go to report Social media in the Philippines
Top Seller

The most important key figures provide you with a compact summary of the topic of "Social media in the Philippines" and take you straight to the corresponding statistics.