Published by
Daniel Slotta,
Sep 1, 2022
For many years, it has become more and more apparent that artificial intelligence (AI) is the next technology to disrupt the status quo of personal and commercial human interactions. Now as the capabilities of hardware and algorithms improve, AI slowly advances into the domain of human abilities while taking on increasingly sophisticated tasks. Extensive utilization of the technology has the potential to greatly enhance productivity and bring about crucial competitive advantages on the global stage. As a consequence, countries around the world compete for global leadership, and at the vanguard is China, whose political leadership has declared the development of artificial intelligence a national priority.

Race to the top

The artificial intelligence industry is very distinct in the way that companies and individuals promote innovation and generate profits. Most industries drive innovation with investments and protect their technology with patents whereas the AI research field is distinctively open-source. Innovations are publicly shared at conferences and among peers, which means that technological advantages are not necessarily the driving force of success in the industry. What instead determines success is the speed at which companies can adapt to advances and the size of their database. Therefore, companies are constantly chasing talent and data, both of which China has an abundance of.

From today’s viewpoint, it is difficult to imagine that China was not always a global leader in the industry. In the early stages of AI development, China lagged behind other nations. However, China managed to catch up and become an industry leader itself through targeted policies designs to improve the county’s AI competency. A further driver was the ability of Chinese companies to quickly adapt proven concepts and further develop them. China also has a large population that is very tech-savvy and uses many online products, which constitute a prerequisite for building the large databases needed to develop AI. In addition to that, the Chinese government has made the development of the national AI industry a national priority which diverted many resources into the expansion of skilled engineers.

Besides increasing the national output, artificial intelligence is a solution to one of China’s most pressing problems in the future, the aging population. like many other nations, the country faces the problem of an aging population and a decrease in the working population. The Chinese government sees AI as a viable solution to this problem, which is expected to increase opportunities for automation powered by artificial intelligence. However, developing artificial intelligence technology requires huge investments in research and development. Even though in the present algorithms play an increasingly important role, a large driver propelling the AI industry is the potential of what AI will be able to do in the future.

In almost every sector of the economy companies insert AI technology into their processes as the potential of the technology seems endless. For instance, in the smart agriculture sector, the commercial drone manufacturer XAG from Guangzhou builds AI-powered agricultural UAVs. In the FinTech industry, artificial intelligence serves as the foundation for InsurTech services. Most importantly, by using smart manufacturing, companies are building the factories of the future to preempt China’s looming labor shortage.

In the following 6 chapters, you will quickly find the 34 most important statistics relating to "Artificial intelligence in China". 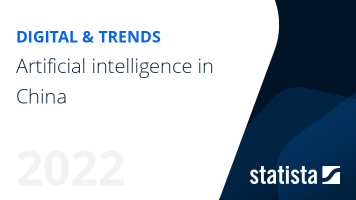 The most important key figures provide you with a compact summary of the topic of "Artificial intelligence in China" and take you straight to the corresponding statistics.