Sports betting is a type of gambling that refers to the act of placing a wager on the outcome of a sporting event. Bets are typically made through sportsbooks, also known as bookmakers, or bookies. Sportsbooks operate both as land-based establishments, for example, at casinos or betting shops, and online. In 2021, the total sports betting revenue in the United States amounted to 4.33 billion U.S. dollars. In the U.S., sports betting is legal at the federal level, however, it is still not legal in every state. Even when the practice is legal, regulations regarding sports betting vary on a state-by-state basis. As of January 2023, 30 states including Washington D.C. had operational legalized sports betting. Nevada, one of the leading U.S. states for sports bettors, reported a total of 126 sportsbooks in 2021. That same year, the win amount of sportsbooks in Nevada reached 445.13 million U.S. dollars. This figure represented a considerable increase over the previous year’s total of 262.8 million.

Which groups engage in sports betting in the U.S.?

How much revenue do states receive from sports betting?

Amount wagered on sports betting in commercial casinos in the U.S.
57.71bn USD

Number of sportsbooks in Nevada
176

Most used sports betting brands by regular bettors in the U.S. 2021

Participation in sports gambling in U.S. 2021, by age 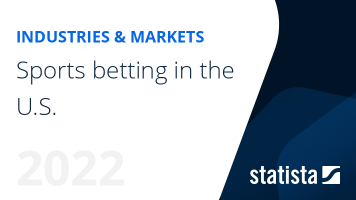 Go to report Sports betting in the U.S.
Top Seller

The most important key figures provide you with a compact summary of the topic of "Sports betting in the U.S." and take you straight to the corresponding statistics.