Published by Statista Research Department, Nov 17, 2022
The Russian smartphone market has steadily developed since the first devices emerged in the early 2000s and especially after the launch of Apple iPhone in 2007. Over 106 million Russians owned a smartphone in 2020, ahead of all European countries. The device’s penetration rate was expected to continue growing in the following years and reach 79 percent in 2025. Russia purchased nearly all devices from abroad. Starting from April 2021, smartphone producers were required to pre-install selected domestic apps before selling devices in the country.

The leading smartphone brand in Russia was Samsung, having accounted for approximately one third of total device unit shipments in the third quarter of 2021. In general, the largest share of smartphones marketed in the country was in the price range between 10 thousand Russian rubles and 20 thousand Russian rubles, while the low-price segment was the second most popular. When it comes to storage, nearly one third of total sold devices had a capacity of 64 gigabytes, while 128-gigabyte smartphones had only a slightly lower market share.

In Russia, smartphones were most commonly employed for web browsing, social media, and e-mail. The reach of social media in the country steadily increased in recent years, exceeding 71 percent in 2021 and forecast to reach over 78 percent in 2026. Furthermore, approximately one half of device owners used video services, games, and shopping apps. Russia was the eleventh-largest mobile app market by consumer spending, which was measured at nearly 1.6 billion U.S. dollars in 2021. That represented almost one percent of the total expenditure worldwide.

Impact of the war in Ukraine on the Russian smartphone market

Due to the Russian invasion of Ukraine that started in February 2022, the United States imposed a ban on exports of various technologies to Russia, including the communication industry; however, devices for consumer use were exempt from the sanctions. Apple paused sales of electronics in the country, as well as exports to it, and limited the operation of Apple Pay, which was the second most popular mobile payment system in Russia. Samsung suspended shipments, reportedly due to logistics issues. Financial Times reported reductions in shipments of Huawei, Xiaomi, and Oppo smartphones; however, the companies have not commented on that. The app market was affected by the restrictions as well. For example, Google Play suspended app purchases and subscription extensions in Russia. Therefore, only free and previously downloaded paid apps were available in the store.

In the following 6 chapters, you will quickly find the 43 most important statistics relating to "Smartphone market in Russia". 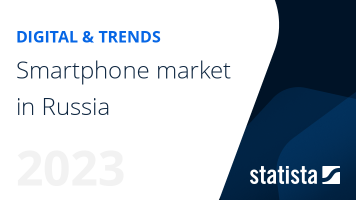 The most important key figures provide you with a compact summary of the topic of "Smartphone market in Russia" and take you straight to the corresponding statistics.