More aspects of everyday life in South Korea - from communication devices to finance, hobbies, daily necessities, and even governmental services - are increasingly shifting over to digital alternatives as digitalization continues. The tendency for doing things remotely has been a developing trend for some years now, which comes as no surprise with the country’s high internet speed and extensive 5G coverage. This was only accelerated by the COVID-19 crisis as digital lifestyles entered every remaining facet of life to avoid meeting people and therefore prevent the spread of the virus.

What do South Koreans use the internet for?

South Korea has one of the fastest internet connections worldwide and had the second-highest internet penetration among Asian countries. As such, using the internet for a variety of things has long become standard for most South Koreans. Most people liked to use the internet for communication purposes, however using it for entertainment such as reading webtoons, watching movies, or playing online games, was also very popular besides the basic usage of looking up information.

In July 2020, the South Korean government disclosed their “Digital New Deal” policy, also called Untact (un + contact). The goal of this policy was to increase economic growth while also adapting to the new circumstances amid the COVID-19 pandemic by removing as much human interaction as reasonably possible.
This was implemented by establishing ways to take care of business without direct contact with other people, such as using self-service convenience stores and utilizing contactless and mobile payments. The policy also included the promotion of remote health care and education, such as smart hospitals and smart schools. However, there were still reservations about the use of remote health care and online schools among the South Korean public. Moreover, although there was a shift away from meeting people in real life due to the pandemic, almost a third of people belonging to Gen Z still preferred meeting in person over online meetings.

Problems of the shift to digital lifestyles

One problem of this tendency to live life mostly online, besides the risk of overdependence on the daily used smartphones, is the danger of leaving behind the elderly who are not as tech-savvy as the younger generations. As an ageing society, the share of elderly among the population in South Korea is rather high. To counter this problem, it was planned by the government to broaden internet access across all rural areas of the country, ultimately aiming to provide around 70 percent of citizens above 70 years of age with mobile internet and establish digital education centers.
This text provides general information. Statista assumes no liability for the information given being complete or correct. Due to varying update cycles, statistics can display more up-to-date data than referenced in the text. 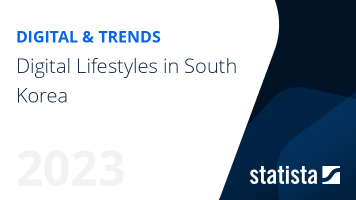 The most important key figures provide you with a compact summary of the topic of "Digital Lifestyles in South Korea" and take you straight to the corresponding statistics.