Published by
Nina Jobst,
Aug 1, 2022
In South Korea, where almost the entire population under 70 years old owns a smartphone, media consumption has become more mobile than ever. Along with the growth in video and music streaming using mobile devices, the South Korean webtoon market has also seen considerable growth. Webtoons (“web” + “cartoons”) are online-exclusive comics that are updated regularly and can be easily accessed via mobile applications.

Fierce competition for the lead

The most popular webtoon service in South Korea was Naver Webtoon, followed by the platforms Kakao Page and Daum Webtoon of Kakao Corporation. The latter two were merged and rebranded as Kakao Webtoon in August 2021 to combine existing series from Daum Webtoon as well as new works from Kakao Page. The platform has new features like a recommendations page, artwork as moving pictures, and 3D animated movies. Kakao Webtoon’s turnover is expected to almost double over the next years.
Daum Webtoon is considered one of the earliest webtoon platforms in the market. It introduced a system for paid content and was the first service with a successfully serialized webtoon named Hello Schoolgirl.
Naver Webtoon and Kakao Webtoon are competing for the leading market position, not only in the domestic market but also in foreign markets. Since webtoons are becoming more popular worldwide, the services also launched in America, Europe, and other Asian countries, with localizations and translations supporting their market entries. Among this, Naver was granted the trademark of their “Webtoon” logo in South Korea and the word “webtoon” itself in the United States, Japan, Taiwan, and Indonesia. According to the company, this will strengthen its branding as a leading figure in the market.

Besides purely reading them, webtoons have also made their way into other aspects of life. With the rising popularity of webtoons, the demand for merchandise has also increased; around 40 percent of digital comic readers have purchased merchandise of digital comic characters. Additionally, webtoon-based content is becoming more established within the mainstream media landscape through TV and animated series, movies, and mobile games. Even Netflix has acknowledged the popularity of these adaptations, securing the rights to screen series such as Itaewon class, Misaeng, and Sweet Home to an international audience, and even investing more in the production of South Korean content.

Occasionally, webtoons are based on (web)novels, which was a leading factor for both Kakao and Naver to acquire foreign web novel platforms. The former recently acquired Radish and Tapas, while the latter purchased Wattpad.

In the following 6 chapters, you will quickly find the 28 most important statistics relating to "Webtoon industry in South Korea". 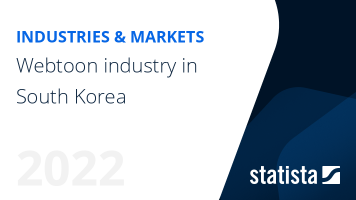 The most important key figures provide you with a compact summary of the topic of "Webtoon industry in South Korea" and take you straight to the corresponding statistics.